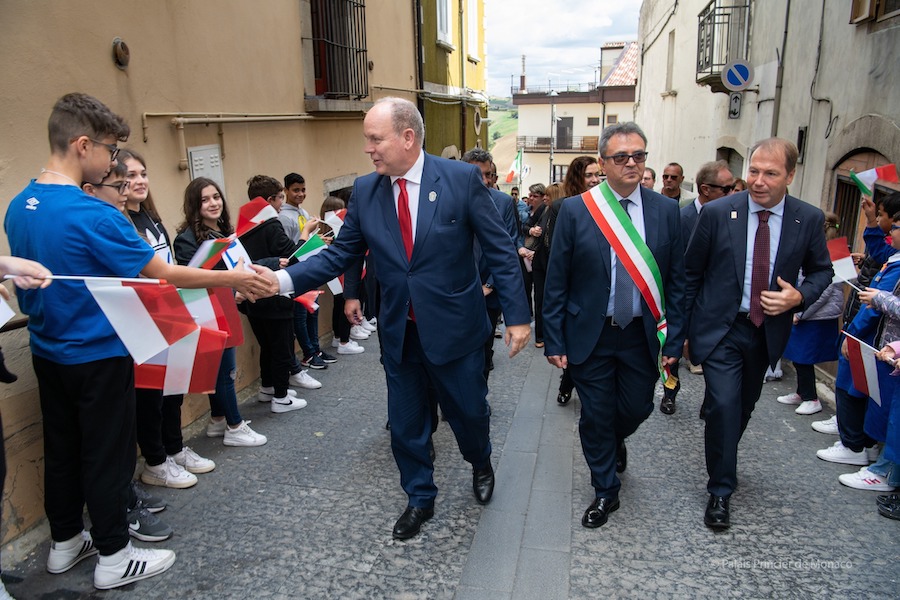 As part of his regular travels to territories historically linked to the Grimaldi family, Prince Albert II this week visited Ripacandida, in Basilicate, southern Italy.

The Prince was welcomed at the entrance of the city by Mayor Giuseppe Sarcuno, where he unveiled a sign marking the city’s membership to the Grimaldi Historical Sites of Monaco network.

Guided by the mayor, the Prince then met with elected officials at City Hall before walking to the Place du Peuple to listen to speeches delivered by the mayor, region President Vito Bardi, and the Prefect Michele Belltier.

The Prince expressed his gratitude to the municipality and local authorities for the warm welcome that was given to him, and recalled the secular links that exist between the Principality and Ripacandida. He then unveiled a plaque commemorating his visit and christened the Belvedere of the Princes of Monaco.

A little later, the Prince walked to the Palazzo Lioy, a residence that used to belong to a noble family who served the lords of Monaco. The Lioy Lui family presented to Prince Albert the original doctoral degree from the University of Naples, emblazoned with the Grimaldi coat of arms, that was awarded to one of their ancestors in 1609 when the rulers of Monaco were lords ofRipacandida.

The Prince went on to visit the sanctuary of San Donato, a former Franciscan convent dating back to the 15th century and classified as a national monument since December 2010, where he and his delegation enjoyed lunch.

The day ended with a dinner in the presence of the Monaco delegation and the mayors of Ripacandida, Monteverde, Canosa and Terlizzi.

In 1524, the Grimaldis of Monaco placed themselves under the protection of Habsburg Spain. In 1532, to consolidate the alliance, Emperor Charles V, who also dominated the south of the Italian peninsula as King of Naples, granted the lords of Monaco a certain number of fiefs.