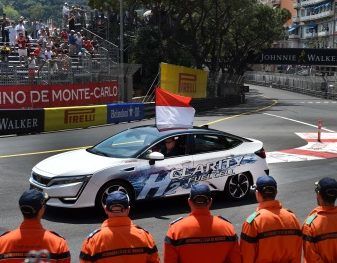 The hydrogen-powered Clarity is on sale in the US, but hasn’t yet arrived on European markets. However, the company will put a total of 185 demonstrations on the road in Austria, Denmark, Germany, Italy, Sweden, and the UK as part of a five-year campaign.

A first batch of six cars has arrived, and they will be seen on the road in London and Copenhagen as part of the Hydrogen for Innovative Vehicles (HyFIVE) EU demonstration.

The Clarity Fuel Cell has a range of 403 miles (650 kilometres) in the New European Driving Cycle test, but the US’s Environmental Protection Agency’s more stringent evaluation estimates the car can do 366 miles, or 589 kilometres, on a full tank of hydrogen, more than the Tesla Model S (335 mile/539 km) and the hydrogen-fuelled Toyota Mirai (321 miles/516 km).

The Clarity Fuel Cell is currently available in Japan and the US, where customers in California can lease a Clarity Fuel Cell from €328 a month. The offer also includes up to €13,350 of hydrogen refuelling. An electric and plug-in hybrid versions of the Clarity will soon be available in the US, according to Honda, starting in California and Oregon, but the range could be as low as 42 miles when running only on electricity.

Local News Stephanie Horsman - September 21, 2020
Players and representatives of AS Monaco Basketball have announced the 2020-21 season by introducing new players and showing off their new kit.

Local News Stephanie Horsman - March 30, 2021
Demonstrations were held in Menton, Beausoleil and Nice by protesters wanting the French government to give more weight to a new climate law conceived by the Citizens' Convention.