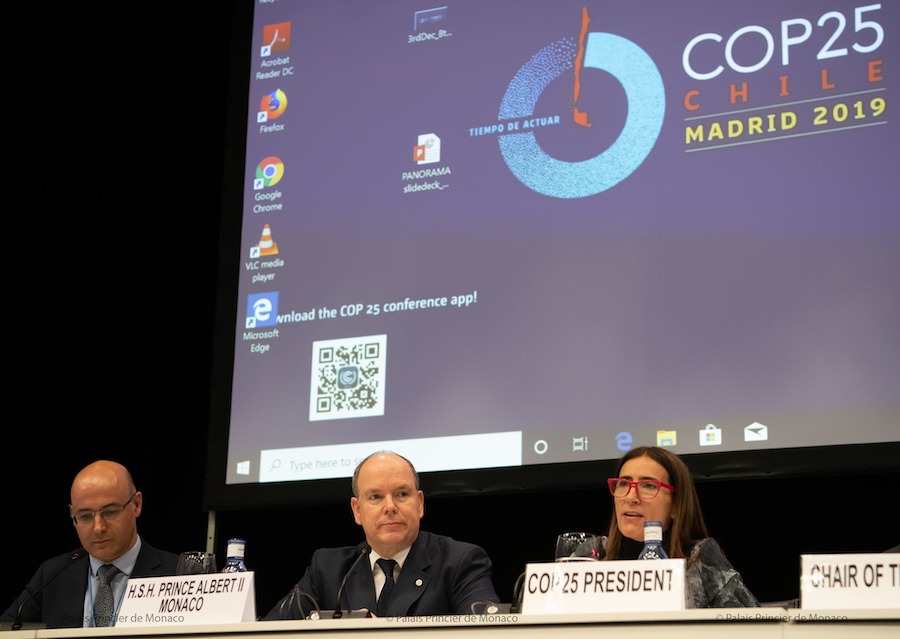 HSH Prince Albert II addressed the opening day of the UN Climate Change Conference (COP25) in Madrid by urging member states to take leading roles in the protection of our environment.

The Sovereign Prince took part in high-level meetings with Heads of State and Government from 1st to 3rdDecember at the conference, where he was given the chance to outline steps the Principality is taking at home and abroad in the name of the environment.

“My country has set, as many states or large communities, a clear goal of reducing our gas emissions to achieve carbon neutrality in 2050,” said the Prince.

He also reiterated how Monaco has set lofty goals such as the intention to reduce carbon emissions by 50% in 2030, the banning of single use plastics, and the ban on fuel oil to heat buildings in 2022.

“At the same time, and even if our energy mix is ​​already very little carbon, we will develop the use of renewable energies, especially solar, as well as that of networks of hot and cold from sea water heat pump, which already satisfies nearly 20% of our global energy balance,” he further stated.

The Prince reminded those present of his commitment to assist others outside the borders of the Principality, through both his foundation and through financial support from the government. Recently, for example, Monaco pledged €3.75 million to the Green Climate Fund, which helps developing nations adopt practices to counter climate change.

He also spoke at the meeting hosted by the Chilean President on the state of the oceans, a topic dear to him.

“As world leaders convene at COP25, it’s critical we commit to taking immediate action to address the crisis facing our global Ocean,” he said to the gathering.

Prince Albert has been a leading voice in the need to protect our oceans for well over a decade, dedicating 60% of his foundation’s initiatives to their protection. He played a key role in contracting the IPCC’s Special Report on the Ocean and Cryosphere as well as the Because the Ocean Initiative’s Ocean for Climate Report.

After the meetings, the Prince was invited to a reception held by the King and Queen of Spain at the Royal Palace in the Spanish capital.