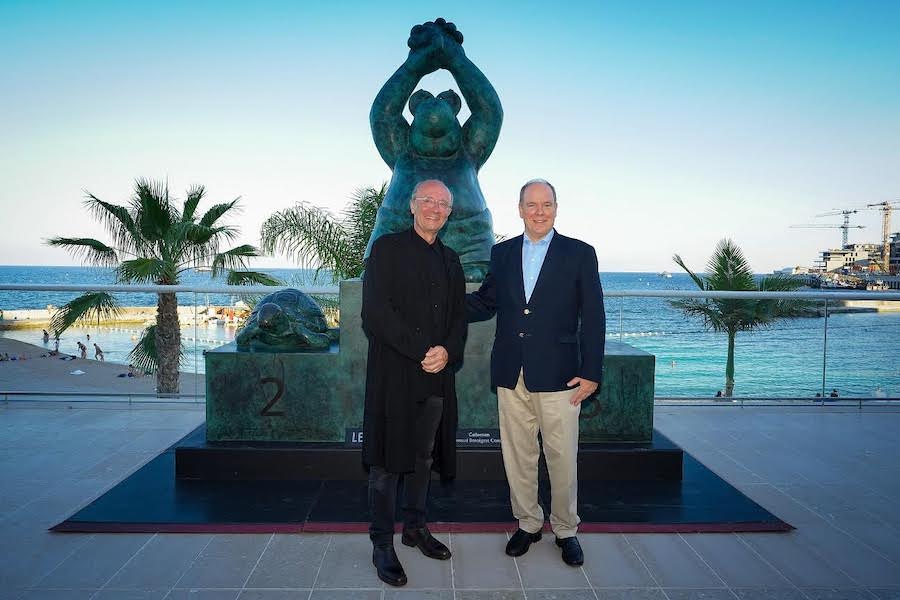 A sculpture exhibition featuring Philippe Geluck’s famous cat of the Charlie Hebdo cartoons is gracing the Larvotto promenade, featuring 20 gigantic pieces created in dedication to the victims of the 2015 terrorist attack.

Belgian cartoonist Philippe Geluck has delighted readers of French publication Charlie Hebdo for decades with the dark humour and witty one-liners he puts into his now-famous “cat” cartoons in every issue.

Now, Geluck has created an exhibit based completely around the iconic character and his travelling show, called ‘Le Chat Déambule’ (The Cat Walks), has just landed in Monaco, officially inaugurated by Prince Albert with the artist on Tuesday 5th July.

The sculptures of the Cat are 2.7 metres high and weigh in at 2.5 tonnes apiece. Using detailed sketches to create each pose, he has once again captured the moods and whimsies of the times.

There are 20 total sculptures including the Cat sitting under an umbrella whilst “rain” falls around him, the Cat lying sideways on a smashed car, the Cat posed as Atlas holding up a globe filled with plastic waste, and the Cat taking a swing at a golf ball that’s being snatched away by a passing bird.

The exhibition, which is dedicated to the victims of the Charlie Hebdo attack in January 2015 in which 12 people were killed by terrorist gunmen, took two years and nearly 60 people to complete.

Geluck is also currently working on the launch of the Museum of Le Chat and Humorous Art in Brussels, which is set to open its doors to the public in 2024.

Le Chat Déambule has already been a hit in cities like Geneva and Bordeaux and will continue to make its way to several European other destinations. So far, the exhibition has attracted more than six million visitors.

The Cat exhibit will remain in Monaco from 6th July to 2nd October on the newly renovated Larvotto Promenade.