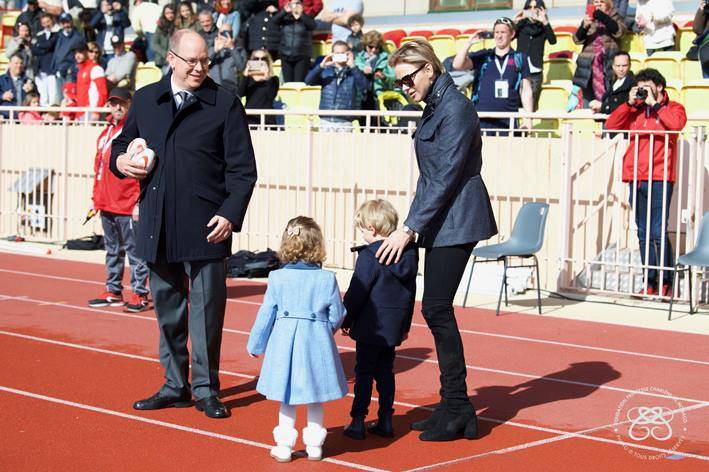 The event was organised by the Monegasque Rugby Federation with the support of the Princess Charlene of Monaco Foundation, and the best striker in the French National Team’s history Frédéric Michalak – Patron of this eighth edition of the tournament – was also present.

South African World Champion JP Pietersen additionally came out to watch the 16 U12 teams from 13 countries. Tunisia competed in the final against Scotland and won the Tournament.

The Saint Devote Challenge Trophy was awarded to Monaco by HSH Princess Charlene.

The “Tots Rugby” program introduced the sport to children three to five years old, while “Rugby for Everyone” provided educational workshops and competitions adapted to children with disabilities.

In the Scottish tradition, the Edinburgh team was accompanied by a pipe band, which offered participants and spectators a good atmosphere and cheerfulness. Altogether, more than 350 children were gathered to celebrate a day of rugby.

Fans of AS Monaco basketball got what they paid for on Saturday night with a solid win against Pau-Orthez on their home turf at Gaston Médecin.

AS Monaco score first win of the...

AS Monaco have finally broken the spell by winning a decisive 3-1 victory at home over OGC Nice.

In an exciting night for AS Monaco fans, the beleaguered team had a huge win over Nice in French league derby match on Tuesday night.

Russian midfielder Aleksandr Golovin was decidedly the game’s most valuable player scoring two goals and one assist. The first goal was taken in the 29th minute and the next in the 74th, both with skilful assistance from Cesc Fabregas. His assist to Wissam Ben Yedder six minutes later sealed the deal for the Red and Whites.

A disappointing reversal for an Islam Slimani-led 4th goal occurred when it was reported Gelson Martins had been offside in the build-up, but this did nothing to stop the team from keeping up momentum.

Nice’s sole goal was made by Martinique-born fullback Patrick Burner early in the second half.

The win takes some of the pressure off coach Leonardo Jardim, but it will take more than one win to get the Red and Whites back on track.

“Unfortunately, the season does not start tonight,” said Jardim in a press conference after the match. “But this victory is a promising start.”

Photo: Charly Gallo/DC[/caption] Speaking in Milan on Thursday, November 9, Tournament Director Zeljko Franulovic announced his new title "Rolex Monte-Carlo Masters" before presenting an overview of the 2018 edition, which will take place from April 14 to 22 on the legendary courts of the Monte-Carlo Country Club. At a press conference that took place on the sidelines of the Next Gen ATP Finals, an unprecedented tournament that brings together in Milan the seven best players in the world rankings, Mr Franulovic said: "The 2017 edition of the Monte-Carlo Rolex Masters beat all records. Helped by exceptional weather, the tournament attracted a record crowd with a total of 135,809 spectators, of whom 33 percent were Italians. We played sold out from Monday to Sunday on all five courts. A first for us!" The Tournament Director also indicated that the ticket booking website for the 2018 edition, which has been open since October 2 and is available on the official website, has already registered a 21 percent increase over the previous year. The tournament, which was first held in 1897, will kick-off on Friday, April 13, with the drawing of the final table. Many activities are on the agenda, such as Children's Day on Sunday, April 15, and the traditional Grand Night of Tennis on Friday, April 20. Organised by the Monegasque Company for the Operation of the Tennis Tournament, the Rolex Monte-Carlo Masters is the first European tournament in the ATP World Tour Masters 1000 category.