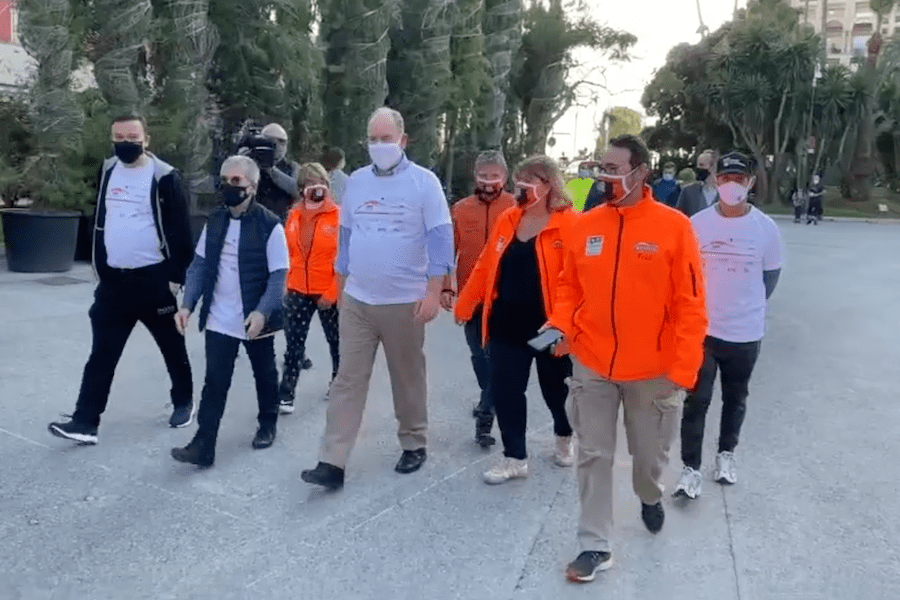 Prince Albert has officially kickstarted No Finish Line 2020, with nearly 5,300 participants and 140 teams walking and running to benefit sick or disadvantaged children in the area.

No Finish Line, now in its 21st year, has been a popular staple of the charity events circuit since its inception. The general idea has remained intact – to benefit Children and Future, an organisation that helps ill and underprivileged children – though this year there have been a few tweaks due to the ongoing health situation.

As a result of lockdowns and strict health measures, it was transformed into a full-blown virtual “race”, and its reach has crossed borders and turned every street into a part of the course.

Prince Albert made the symbolic kick-off for the 5,270 registered walkers and runners on Sunday 15thNovember at 3pm in front of the Big Top in Fontvieille. He was joined by a selection of government ministers as well as Children and Future President Ariane Favaloro and No Finish Line’s founder Philippe Verdier, and several volunteers.

As opposed to running or walking the traditional circuit around Monaco, this year’s participants are all using the Zapsports app that will record the kilometres they rack up until the race ends on 22nd November at 3pm. It means that runners can be participating literally anywhere in the world.

For every kilometre travelled, Children and Future will donate one euro to support local projects for children in need. The charity is hoping to reach an astounding goal of 400,000 kilometre this year.

AS Monaco Basketball’s Will Yeguete is the 2020 celebrity sponsor, and both Olivier Giroud, striker for the French national team, and ex-Formula 1 world champion Nico Rosberg have posted short videos of support on social media.

Running concurrently and in conjunction with the race is a toy drive that will ensure the children affected by Storm Alex will have a happy Christmas. New toys will be accepted at the Fontvieille Big Top from now until Saturday 21st November. Additionally, Children and Future has earmarked a certain amount of donation money for projects to help the children of the stricken region.

Finally, to add to the fun, children’s entertainment is planned for Wednesday 18th November from 2pm to 5pm at the Big Top.