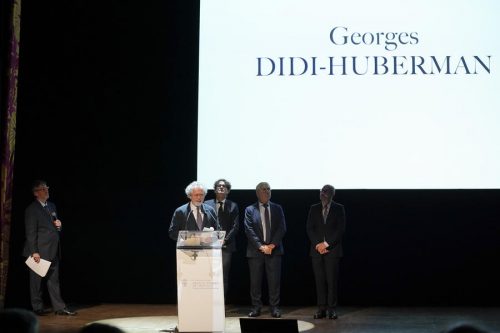 Each year, The Prince Pierre Foundation and the Monaco Philosophical Meetings scour the globe looking for an author to honour for their philosophical work or works. The person must have at least one seminal work which has opened eyes in this field, and has explored different views on science, politics, history, anthropology, ethics or psychoanalysis.

Mr Didi-Huberman more than fit the bill. He has had an illustrious academic career having written some 50 books, curated several exhibitions in France and abroad and won numerous awards, including the well-respected Theodor W. Adorno Award given by the city of Frankfurt. Since 1990, he has been the director of emeritus studies at the prestigious Ecole des Haute Etudes en Sciences Sociales and previous to that he taught at the University of Paris VII.

His work is in the field of ethical gaze and to that end his studies have focused on the history and theory of Renaissance images to contemporary art. Additionally, he is involved in thoughts and discussions on uprisings, which he believes to be a word strong enough to enfranchise the “voiceless” and “disinherited” of the world.

The bearer of the award is asked to give a lecture the following year, and Mr Didi-Huberman will do so on 27th January 2020 at 7pm the Maison des Océans in Paris.