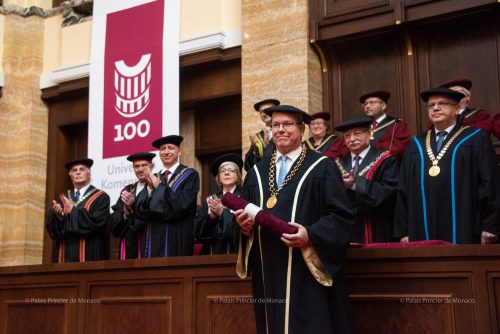 In recognition of HSH Prince Albert II’s tireless dedication to environmental causes, Comenius University in Bratislava awarded him with an honorary doctorate degree.

The degree was given for the Sovereign’s actions in the fields of protecting natural and cultural heritages and for his efforts with regard to climate change in conjunction with his foundation, the Prince Albert II of Monaco Foundation, whose goals are to support environmental protection using science and education.

Upwards of €55 million has been donated to the causes he has championed thus far and include deforestation, climate change, endangered species defence, managing the loss of biodiversity, ocean protection and identifying and using alternative energy sources.

The university’s Natural Sciences Department signed an accord with the Principality this year, agreeing to work together on activities promoting the protection of the environment.

Comenius, a Slovakia-based university, was founded in 1919, back when the region was part of communist held Czechoslovakia. Today, it is the largest university in the country and is currently celebrating its 100th year.

The Prince also took the opportunity to support the first edition of ‘No Finish Line’ in Bratislava, organised by Philippe Verdier, creator of the solidarity race. He was surrounded by sporting celebrities including Peter Sagan (cycling), Dominik Hrbaty (tennis), and Matej Toth (athletic walking) in completing the last kilometres of the event and later presented the winners with trophies.