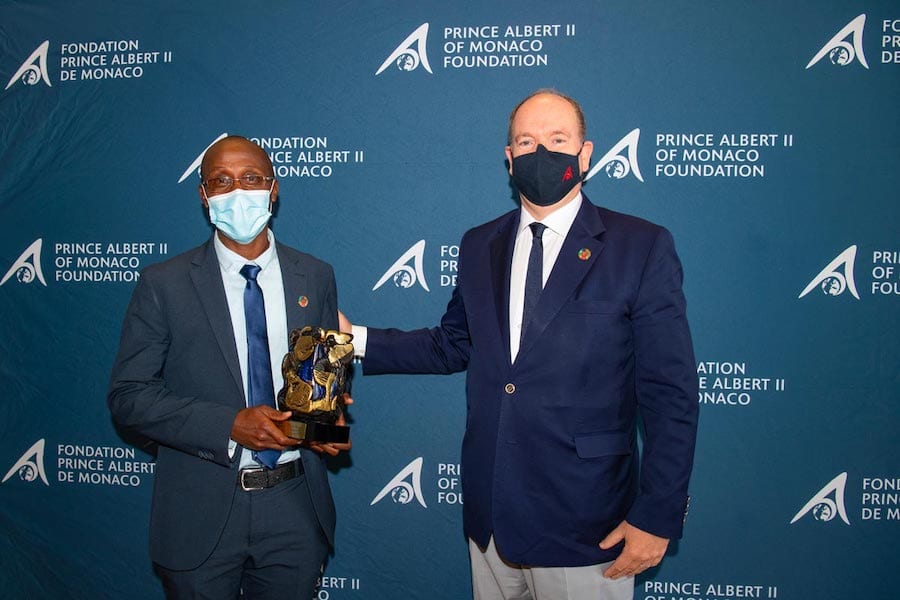 Prince Albert has awarded his Prize for Innovative Philanthropy to Dr Mutahunga Birungi, on behalf of the Bwindi Community Hospital in Uganda, for its commitment to providing access to healthcare for the region’s poorest communities.
Prince Albert delivered the award on Monday 7th June, as part of the 11th edition of the Prince’s Round Table for Philanthropy.
Dr Mutahunga Birungi, Executive Director of the Bwindi Community Hospital, received the 2021 Prince’s Prize for Innovative Philanthropy in recognition of the exceptional work carried out by his community hospital in Southwestern Uganda.
The prize is a joint initiative of the Prince Albert II of Monaco Foundation and the Tocqueville Foundation, to reward and support innovative projects that encourage philanthropy in the service of sustainable societal innovation.
The Bwindi Community Hospital (BCH) was founded in 2003 by Dr Scott Kellerman and his wife Carol to help the Batwa indigenous community who used to live in the Bwindi Forest, before it was registered as a sanctuary for mountain gorillas.
Each year, the BCH deals with more than 40,000 consultations and directly hires thousands of people for local actions in the field of healthcare.
The hospital’s health insurance plan, eQuality, allows 28,000 people to have access to quality healthcare without incurring costs that are unaffordable for these communities. The BCH also offers a waiting house for Batwa women with a high-risk pregnancy to ensure they are cared for by a qualified midwife during labor. This involvement has helped to increase the number of hospital deliveries to 90%, whereas 10 years ago it was only 35%. Meanwhile, child mortality has lowered from 120 to 46 deaths per 1,000 births.
The BCH aspires to become a regional centre of excellence, providing tertiary healthcare to train high-level professionals and play a leading role in the field of healthcare research and innovation.
In receiving the award, Dr. Birungi thanked the Prince Albert II of Monaco Foundation and the Tocqueville Foundation for considering the Bwindi Community Hospital as worthy of the honorary distinction: “I feel extremely humbled that, from an open-air clinic for Batwa indigenous people 18 years ago, Bwindi Community Hospital has grown to make a reasonable contribution to improving access to healthcare and health training, especially for those who need it most. Our achievement has been a collective effort of the community, staff and many other people acting as individuals or as organisations from different walks of life.”
Dr. Birungi added that it is by “acting together that we make the world a better living place for ourselves today and for those coming after us.”
Dr. Birungi’s emphasis that “we share one planet” echoes the theme for this year’s edition of the Prince’s Round Table for Philanthropy: Planetary Health.
Each year, this closed-door event brings together, alongside the Prince, major international philanthropists who wish to discuss the role of philanthropy in the face of the major challenges the world currently faces.
“At a time when the pandemic has turned our societies upside down, it was essential to address the question of the relationship between planetary health and global health,” says the Prince’s Foundation in a statement.
Laurence Tubiana, Director of the European Climate Foundation and Chair of the Board of Directors of the French Development Agency, and Prof. Johan Rockström, Director of the Potsdam Research Institute on the Effects of Climate Change and Professor of Earth System Science at the University of Potsdam, also shared their expertise in climate action and governance before establishing the close link between human health and planetary health.


Photo by the Prince Albert II of Monaco Foundation