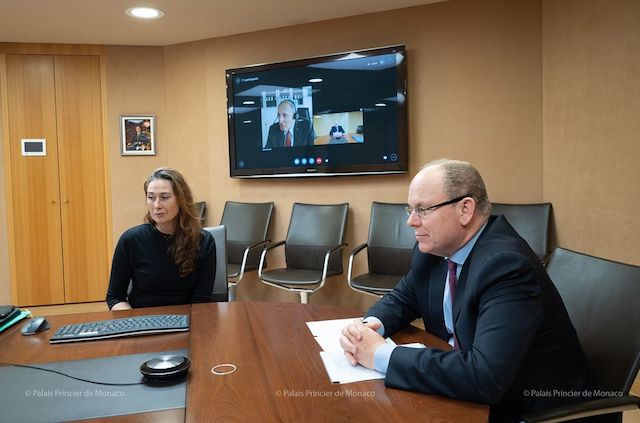 Prince Albert II spoke via video-conference to the five post-doctorate programme fellows from the ITER project, who have just completed their two year research assignments funded by the Principality.
As part of the ongoing fellowship programme created in 2007 under the backing of the International Atomic Energy Agency (AIEA), the ITER Postdoctoral Fellowship Project selects promising engineers or scientists from the affiliate countries, including Monaco, the USA, Russia, Japan, India, South Korea, and EU member states, to work alongside ITER specialists, contributing to the project through their own original research and work.
The latest fellowship went from 2018 to now and five hand-picked students were financed wholly by the Principality. Professor Bernard Bigot, ITER’s General Director, took the opportunity of the video call to personally thank the Sovereign Prince and the Principality for active participation and continued support. These thanks were reiterated by Dr. Tim Luce, Scientific Department Head at ITER.
Prince Albert II was joined on the Monaco end by Cabinet Advisor Anne-Marie Boisbouvier for the call.
The five fellows chosen by Monaco came from vastly different backgrounds and with different interests.
Spaniard Javier Artola obtained his PhD in plasma physics and fusion science at the University of Aix-Marseille in France where he researched the physics of large-scale plasma instabilities that typically arise in tokamaks. Using this expertise, Javier will assess the asymmetric forces that could act in the vacuum vessel during plasma vertical displacement events (VDEs).
Jonathan Coburn earned a PhD in nuclear engineering from North Carolina State University in the United States. Based on his experience in researching the impact of high heat fluxes on plasma-facing components, Jonathan will assess the long-term power handling capabilities of the beryllium first wall panels. This assessment will include modelling the erosion, melting, and deformation that may occur during severe plasma disruptions.
Jae-Sun Park received his PhD at the Korea Advanced Institute of Science and Technology (KAIST) working on boundary plasma simulations of KSTAR using ITER code. Building on this experience, he will develop a boundary plasma database for the non-active phase of the first three to four years of the ITER operation. The database will be used for boundary plasma physics research such as divertor detachment physics for sustainable divertor operation, as well as for the coupling to integrated models.
Armed with a PhD from the Swiss Plasma Center (SPC) at École Polytechnique Fédérale de Lausanne (EPFL), Switzerland, Joyeeta Sinha (India) will work on models for the different plasma diagnostics to determine the useful measurement range for plasma initiation during First Plasma. The methods to improve the diagnosis of plasma parameters for the First Plasma operation developed by Joyeeta will then be tested experimentally on other tokamaks such as JET.
Satoshi Togo earned his PhD at the University of Tokyo in 2016 and then worked as a researcher at the Plasma Research Center at the University of Tsukuba, Japan. At ITER, Satoshi focuses on investigating turbulent transport at the plasma edge of tokamaks, which is particularly important for ITER from the viewpoint of core plasma performance and the power flux deposition on plasma-facing components.
Based in Cadarache, France, the project is for the advancement of nuclear research based around the nuclear power plant situated there to demonstrate that nuclear energy is a clean, renewable, environmentally-friendly source of power for today and the future.
“The principal motivation of the research fellowships is the development of excellence in research in fusion science and technology within the ITER framework,” ITER explains on its website. “Brilliance and creativity, together with understanding of the relevance of the individual research interests to the ITER Project, are a key requirement.”