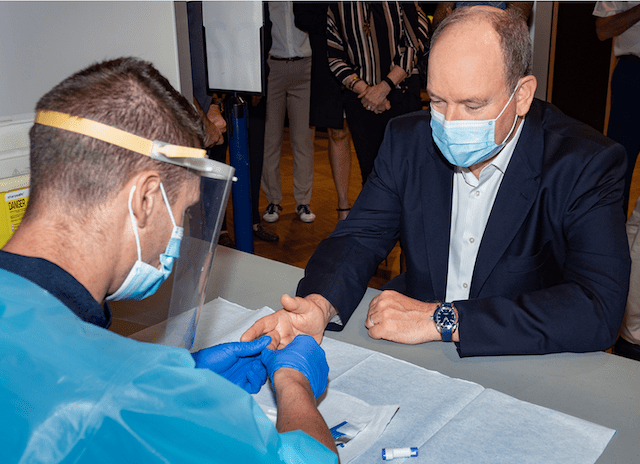 Prince Albert II has been tested at a Covid-19 screening centre in Monaco to raise awareness about the government’s campaign to have as many residents and employees of the Principality tested as possible.
The Head of State visited both the Espace Léo Ferré and the Grimaldi Forum on Tuesday morning, and decided that he too would have the voluntary antibody blood test. The result was positive, which is not surprising considering the Prince contracted the Covid-19 virus, and was subsequently cleared of it, several weeks ago.
The Prince’s visit, in fact, served to raise interest in the immense screening campaign, which has now entered its second week. Both Monday and Tuesday of this week drew large numbers, partly due to the fact that surnames starting with G all the way through to N were invited to the centres. Meanwhile, people who did not get tested last week also have the opportunity to come to the testing centres throughout this week. No appointment is necessary.


By the end of last week, 6,600 people had taken advantage of the free screening for Covid-19 antibodies, but it was only half of what the government was hoping for. “We weren’t necessarily as successful as expected, but that’s because of the Ascension Day holiday. Among the residents tested, less than 3% were positive,” revealed Ludmilla Raconnat Le Goff, Secretary General of the Department of Social Affairs and Health.
However, the start of this week has been “encouraging”.
After the two-week screening campaign for residents, Monaco will offer employees an opportunity to be tested. That’s around 50,000 people, against 39,000 residents, who are invited to present themselves for this second phase which will start on 2nd June at the Grimaldi Forum. “We will only keep one screening centre, the largest, because the number of individuals invited makes the logistical organisation more complicated,” said the secretary general of DASS. The operation will remain the same: from 8am to 6pm in accordance with the first letter of the username. Details of how employees will be notified are still being ironed out, but it should be communicated by email or by post.
Meanwhile, if Monegasques or residents were unable to attend during the two weeks devoted to them, they will still be able to go to the congress centre for screening during the second phase of testing.