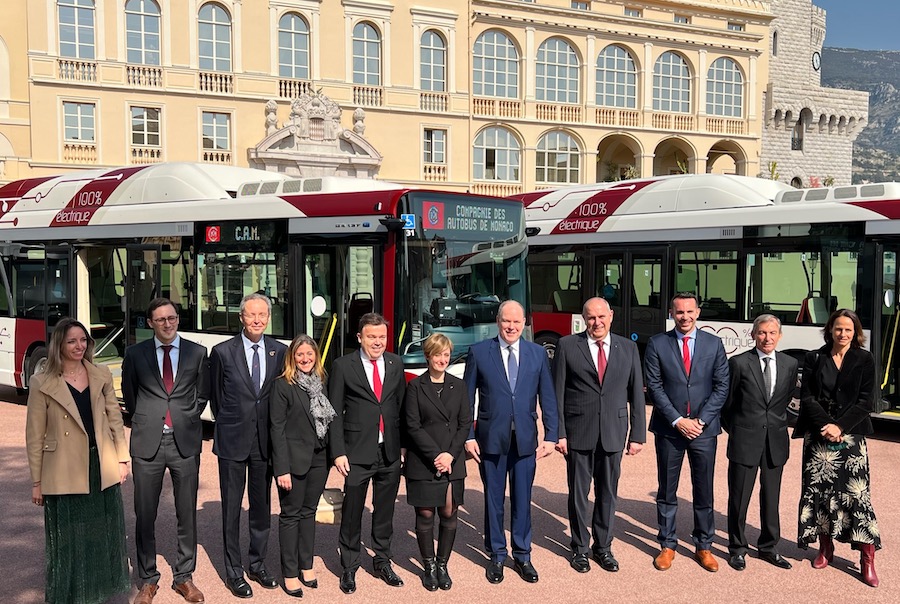 The Compagnie des Autobus de Monaco (CAM) lined up their new 100% electric buses in front of Prince Albert and the Palace on Monday as they prepare to take the fleet to the streets of the Principality.

Monaco Life, like Prince Albert II, had the opportunity to take a ride on the new bus, as invited members of the press were whisked around Monaco Ville before returning to the Palace. What is immediately noticeable is the noise, or lack thereof. The bus is completely silent, whilst the comfort and larger interior will provide passengers a much more comfortable travelling experience.

Roland de Rechniewski, Director of CAM, told reporters, “We are offering a better service to those that are going to work and we are increasing the internal capacity, as the new buses will have 60 seats rather than the 50 on the old buses.”

In order to reach this point, an arduous process has had to be overcome. Due to the topography of Monaco, and the limited charging hours, it was difficult to find a model of bus that could fulfil the requirements.

“In terms of battery capacity, it is three times the size of the biggest Tesla battery. It is very important in terms of the quantity of energy to charge. It has to be done in a relatively short amount of time, because the bus finishes the service the night before and has to be ready for the next day,” said de Rechniewski.

This model of bus, having passed the requisite tests, will now roam the streets of the Principality for the next 15 years. In that time, a great deal of change will occur in Monaco’s public transport system.

“We target having the entirety of the fleet electric by 2025 for all buses currently circulating, and then we have about 20 buses in reserve, which will have hybrid technology, that will be in transition until 2030, at the maximum. So, it is really two phases, 2025 and 2030,” revealed Caron-Dagioni.

Although the speed of technological advancement is unrelenting, de Rechniewski believes that some things should remain the same. Notably, he is a staunch believer that the role of the driver should remain un-automated. “We have to consider that part of the magic of Monaco is the welcome. For me, the bus driver is, above all, an ambassador and I think we can’t deprive ourselves of this contact.”

He continued, “It’s our image, and I confess that I demand keeping our drivers, because the people that come here need to be accompanied, to be guided.”

It is therefore a tale of continuity and change on the streets of Monaco, as the ecological revolution happening within the Principality’s borders gives rise to a new fleet of green vehicles.