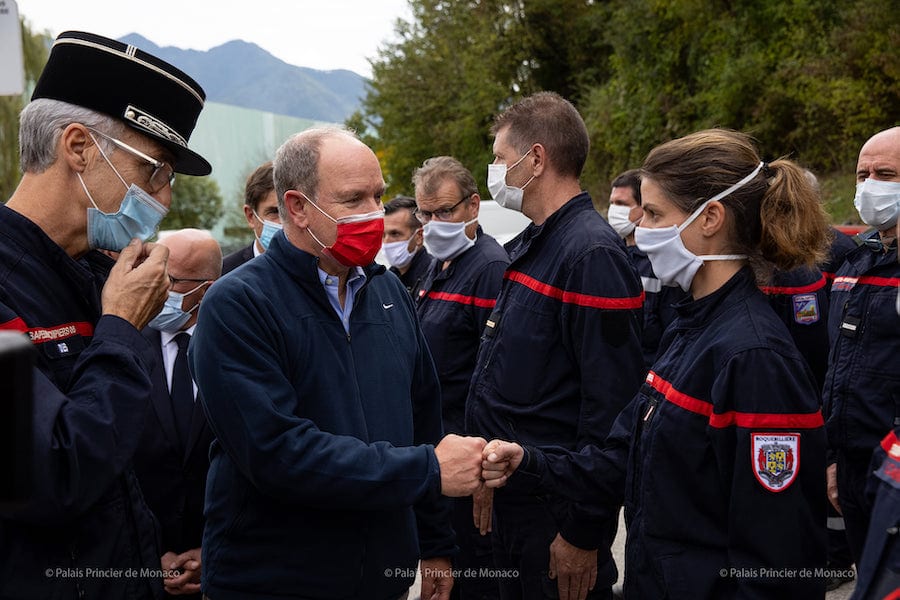 Prince Albert has flown over Saint-Martin Vésubie and visited Roquebillière to see first-hand the devastation caused by Storm Alex and the recovery efforts that continue with the help of Monegasque reinforcements.
On the heels of an official two-day trip to Serbia, HSH Prince Albert II flew by helicopter to the municipalities of Roquebillière and Saint-Martin-Vésubie on Friday to show Monaco’s solidarity and support for the victims of the recent storm which saw heavy rain, wind, floods, mudslides and landslides devastate villages.
The Prince was accompanied by Minister of State Pierre Dartout, Prefect of the Alpes-Maritimes Bernard Gonzalez, President of the National Council Stéphane Valeri, and Colonel Tony Varo, Commander Superior of the Force Publique.
“It was a very moving and essential visit to make to show our moral support to the inhabitants,” said the Prince to the press upon his return to Monaco.
The Head of State chose not to visit the hard-hit La Roya region as he didn’t want to disrupt the busy air corridor that crosses the Roya valley to supply landlocked villages of Tende and Saint-Dalmas de Tende with food and materials.
Prince Albert reiterated to the press after his visit that Monaco is providing material and financial assistance to the Roya, Tinée and Vésubie valleys, where the Monaco Red Cross, the Princess Grace Hospital Centre, the Cardio-Thoracic Center as well as the Corps des Sapeurs-Pompiers are already active in the field alongside associations and individuals of the Principality.
There are still 22 people missing, while six bodies have been recovered, only three of whom have been formally identified. The body of a woman was found Wednesday afternoon in Monegasque waters and handed over to the French authorities, who are yet to confirm if she was a victim of storm Alex.
Photo gallery, click on the images below to enlarge © Philippe Fitte / Monegasque Red Cross and A. Bastello / Prince’s Palace