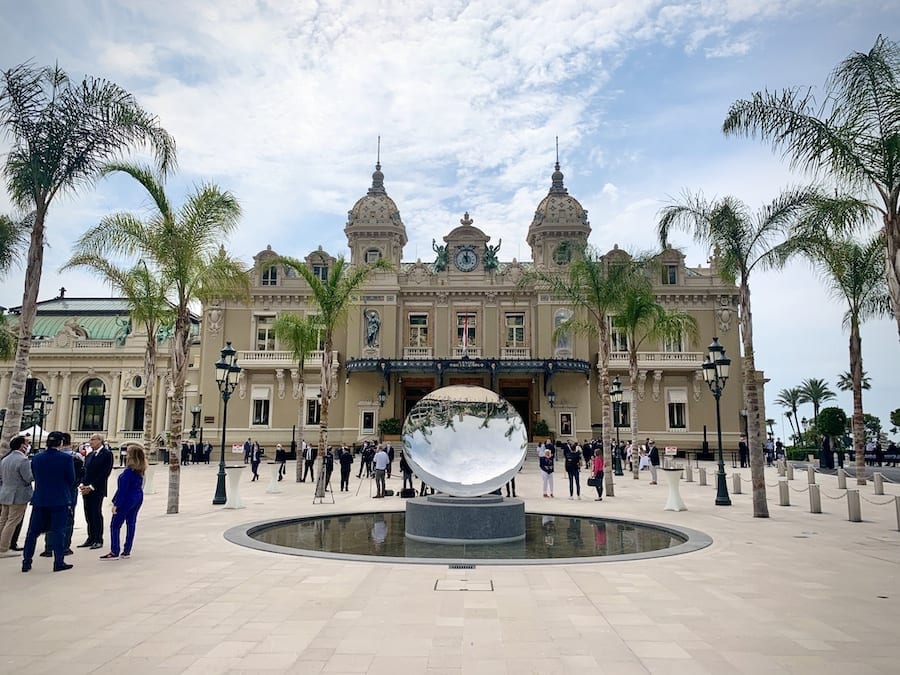 The sun shone brightly above Monte Carlo on Tuesday as Prince Albert and Princess Charlene proudly inaugurated the new Casino Square. The historic moment was celebrated alongside the re-opening of the iconic Café de Paris, signalling a return of “life” to the Principality.
After 10 weeks of muted existence, Monte Carlo sprung back to life on Tuesday as press, including Monaco Life, joined the Princely family, officials from the Monte-Carlo Société des Bains de Mer (SBM), and members of key Monegasque institutions in celebrating the official unveiling of Casino Square.
Joining Prince Albert and Princess Charlene for the momentous occasion were Princess Stéphanie, her children Camille Gottlieb, Pauline Ducruet, Louis Ducruet and their spouses, as well as Gareth Wittstock, brother of Princess Charlene.


The day marked the culmination of an ambitious project by SBM, owner and operator of Casino Square, to reopen the site to pedestrians and usher in a new era for Monaco’s most famous landmark.
A modern Monte Carlo
The square’s redesign marks the final stage of a plan to bring Monte Carlo into the 21st century, a vision which included the spectacular metamorphosis of the Hôtel de Paris Monte-Carlo, the creation of One Monte-Carlo, and the restructuring of the Jardins des Boulingrins.
The square was an important element of SBM’s modernisation plan, but it was imperative that the new design maintain the core values of Casino Square: a place for pedestrians to wander freely, a famous passage of the Formula 1 Grand Prix, and a location where VIPs can park their exceptional supercars and arouse the admiration of passers-by.
Gone is the famous “camembert”, as the locals affectionately called it. The grassy knoll that previously occupied a large portion of the space has been replaced with an elegant beige-stoned esplanade, which offers a clear view of the lavish Belle Époque buildings in the area, including the Hôtel de Paris Monte-Carlo, the Café de Paris Monte-Carlo and the Casino de Monte-Carlo.

It also creates new opportunities for the square, as SBM Deputy Chairman Jean-Luc Biamonti explained to Monaco Life, such as the Celine Dion concert which was regrettably cancelled because of the Covid-19 crisis. “In our decision to radically change the square, our first priority was to flatten it, because the hill at the centre was preventing us from hosting large gatherings in the square,” said Mr Biamonti. “We had a few alternatives, but we decided on this design so we can gather people in the middle of the square rather than pushing them out of the square.”
The Sky Mirror by Anish Kapoor, a fixture of the old square, remains at the centre of the esplanade, surrounded by a circular fountain designed like a small oasis.
“Give the square a chance”
While there are critics of the new design, Mr Biamonti is quick to remind that the square has undergone many transformations over the years, and landscape designer Michel Desvigne has actually embraced the square’s original look from 1850.
“Give the square a chance, let’s see how it develops, how people use it, and then we will talk about it in a year or two,” said the head of SBM.

A visit to Monte Carlo is not complete without a drink or meal on the bistro’s terrace, where the thumping heart of Monaco can really be admired and appreciated. With the redesign of the square, this terrace has been extended by two metres.
“This normally would have allowed us to add 25 more tables,” revealed Mr Brancato. “But with the distancing measures – 50 centimetres between each guest, tables positioned 1.5 metres apart, we actually have less tables than normal.”
Still, in typical Stefano Brancato style, he is optimistic and confident that life will return to some form of “normal” in the near future.
“We have to look ahead, and see where we are at next week, and the week after that,” said Mr Brancato. “Things will not return to like it was before, we must still be careful, but we can at least celebrate and look forward to the return of conviviality to the Café de Paris once again.”

Tribute to frontliners
The short inauguration ceremony included the flying of the #Strongtogether flag by drone in front of the Monte Carlo Casino, a catchcry of solidarity initiated by SBM at the start of the crisis. SBM Deputy Chairman Jean-Luc Biamonti took the opportunity to pay tribute to those on the front line of the Covid-19 crisis in Monaco, in particular staff and volunteers of the Princess Grace Hospital Centre, the Monaco Red Cross, the Public Security, the Fire Brigade and the Monegasque Sanitation Society (SMA).
Guests were then invited to the terrace of the Café de Paris where they enjoyed a selection of treats prepared from fresh ingredients and a celebratory glass of champagne.