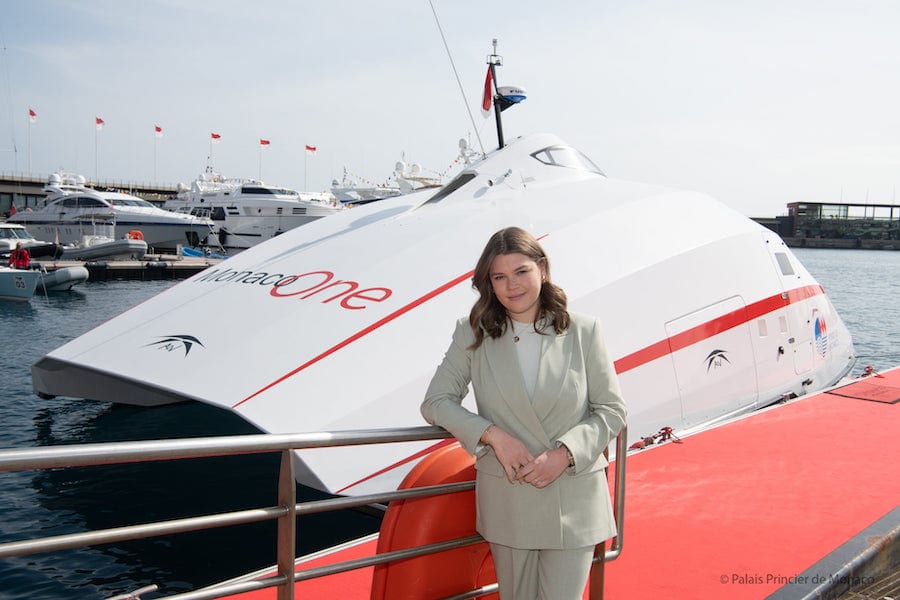 Camille Gottlieb has baptised the new Monaco One shuttle in the presence of her mother Princess Stephanie and other members of the Princely family. The super-fast shuttle will carry passengers from Monaco to the new Calla del Forte port in Ventimiglia.
After sneak peaks and sea trials, the Monaco One was officially inaugurated on Monday 8th March at the Yacht Club of Monaco.
The vessel’s “godmother”, Camille Gottlieb, was accompanied arm in arm by her uncle Prince Albert for the ceremony, which was also attended by Caroline, Princess of Hanover, Princess Stéphanie, Mr. and Mrs. Ducruet, Pauline Ducruet, as well as several Monegasque and Italian authorities.
After breaking the traditional champagne bottle on the hull to formally baptise the vessel, Archbishop of Monaco Monsignor David then blessed the boat, giving a speech addressing all sailors.


Monaco One is the navette that will connect yacht owners moored in the new extension port of Cala del Forte in Ventimiglia to the Principality.
“More than a means of transport, this shuttle constitutes a link capable of joining the ports of Monaco to that of Cala del Forte in just over 10 minutes,” said Aleco Keusseoglou, President of the Société d’Exploitation des Ports de Monaco (SEPM), adding that Monaco One is a “vessel of the future straight out of a science fiction film.”
Thanks to its innovative aeronautical design, the 12-seater catamaran can sail at more than 40 knots and its energy consumption is 50% lower than a conventional boat.
The shuttle will also be equipped with an innovative tracking device to detect the presence of marine mammals in real time.

Created by A2V (Advanced Aerodynamic Vessels) out of La Rochelle, it is one of two operational shuttles out there. Like it’s sister Evian One, which is currently being run on Lake Geneva, the boat uses a design inspired by an airplane wing using aerodynamic lift.
Once reaching a certain speed, the shuttle is “lightened” by half its mass and is usable in even the foulest weather conditions.
“Since this boat should be able to be used in the widest possible conditions, we have designed a machine that is welcoming, but also robust, and easy to use,” said Matthieu Kerhuel, President of A2V.