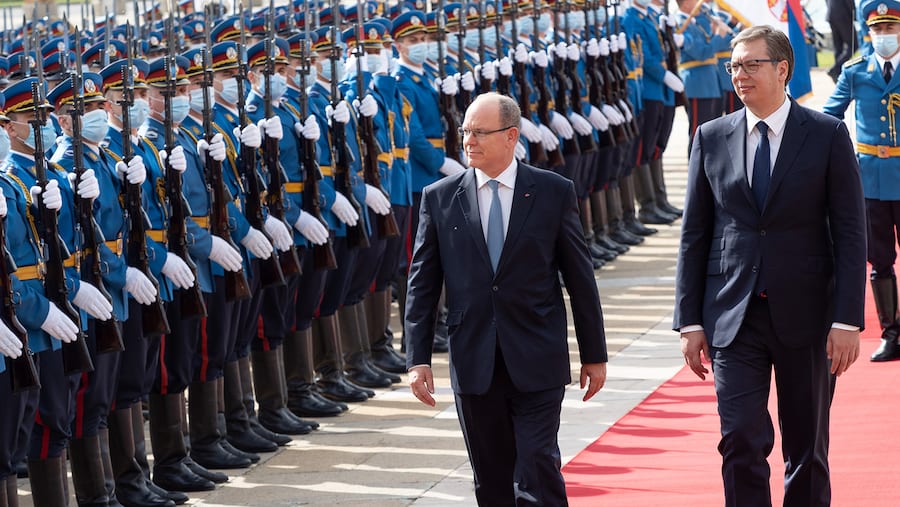 Prince Albert II has made a two-day diplomatic visit to Serbia where he met with President Aleksandar Vučić and witnessed the signing of a new economic agreement between Monaco and the Balkan nation.
The Prince made his first official state trip to Serbia on Wednesday, meeting officials and visiting some of the country’s notable landmarks.
But the big news was the signing of an economic cooperation agreement negotiated by the Monaco Economic Board (MEB) and the Serbian Chambre of Commerce, represented by Guillaume Rose and Marko Čadež respectively, aimed at increasing trade between the countries.
“This protocol concerns future cooperation and increased exchanges between the two entities, in particular the prospect of a future trip of Monegasque entrepreneurs to the Republic of Serbia,” said the Prince. “Economic aspects were also discussed, particularly in the areas of digital transition and transformation, new information technologies and international trade.”
Serbian President Aleksandar Vučić took the meeting as an opportunity to announce that his country would soon become a part of the Franco-German United Nations initiative, Alliance for Multilateralism. He credited Prince Albert as being “fundamental” in his decision.
For the Prince’s part, he too was pleased with the way the trip went, saying, “The Republic of Serbia and the Principality of Monaco can seem different in many ways, but I believe that the complementarities and common points of our countries will be trump cards for strengthening our relations at different levels.”


Monaco and Serbia formed diplomatic relations in 2007 but have not been active in each other’s policies until now. Despite having only recently having formed ties, both the President and the Prince noted that their two nations share many interests, such as the environment, tourism, ocean preservation, and the promotion of sustainable development and renewable energy sources.
Once the formalities were out of the way, the Prince was treated to a visit to the National Museum in the Serbian capital of Belgrade, followed by a state dinner where he joined Princess Maria Pia of Savoy and her sons, Prince Serge of Yugoslavia and Prince Michael of Yugoslavia.
The following day, he went to the Backo Podunavlje Biosphere Reserve, a 176,000-hectare site that has been part of the UNESCO World Network of Biosphere Reserves since June 2017, a bee farm, and Mali Bodrog – a traditional Serbian house that is outfitted with period furniture and costumes showing the way the people of the region lived 150 years ago.
Meanwhile, Princess Charlene was invited to the Presidential Palace of Georgia for a lunch with President Salome Zourabichvili, where they discussed education, sport and culture, and future projects between the two countries.
Photo gallery: click on the pictures below to enlarge © Gaetan Luci, Eric Mathon – Prince’s Palace