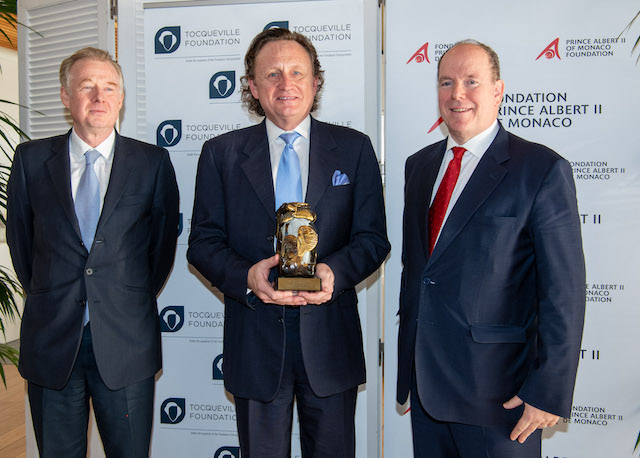 HSH Prince Albert II of Monaco has awarded the Prince’s Prize for Innovative Philanthropy to Douglas Jackson, President and CEO of Denver-based non-profit Project CURE.
Project CURE was founded in 1987 to give doctors and nurses in developing countries the means necessary to treat illnesses, administer vaccines, perform surgical procedures and help with the safe delivery of babies. It is now one of the largest non-profit organisations in the world, collecting and sorting used or surplus medical equipment and supplies from manufacturers and hospitals and redistributing them in 130 developing countries. The initiative has giant distribution warehouses in six major cities across the US, as well as a network of smaller collection centres across other states – all for the benefit of clinics, hospitals and community health centres in developing countries.


The Prince’s Prize for Innovative Philanthropy supports innovative actions or projects in the field of strategic philanthropy and was created through a partnership between the Prince Albert II of Monaco Foundation and the Tocqueville Foundation, a French-American initiative supporting democracy and the rights and responsibilities of all members of society.
The Prince’s Prize is awarded to individuals or institutions as part of the annual Prince Round Table for Philanthropy, a closed-door discussion which brings together major international philanthropists in the Principality. The event, organised at the Monaco Yacht Club, this year celebrated its 10th edition and gathered around 40 philanthropists to discuss the role of philanthropy in the context of the sustainable development goals as defined by the UN.
Top photo: Douglas Jackson received the prize from Prince Albert II of Monaco and Jean-Guillaume de Tocqueville. ©Gaetan Luci Palais Princier