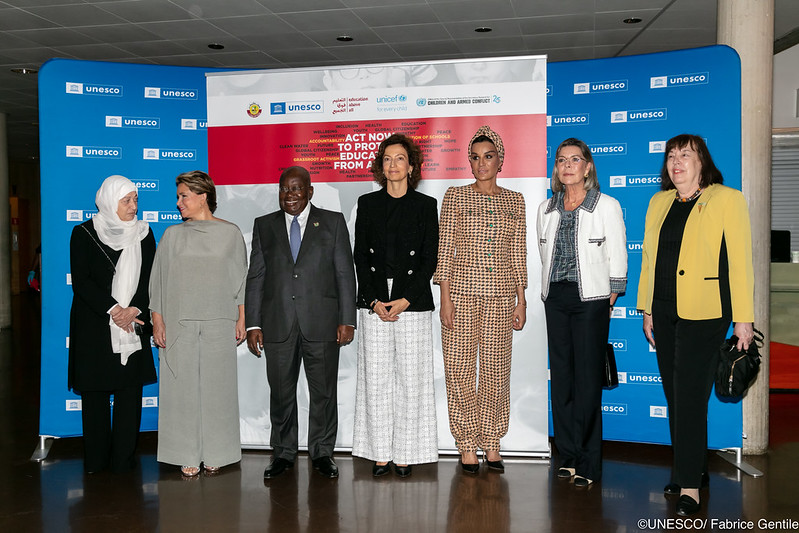 Monaco’s Caroline, Princess of Hanover has leant her weight to a United-Nations movement to protect the right of all children to an education in the face of violence, conflict and destruction.

Many do not even know that there is an International Day for the Protection of Education against Attacks, but this fledgling United Nations-led event is hugely important for children, particularly in war-torn or developing countries.

Conflicts are disruptive by nature, but some of the biggest victims are children, whose lives are unsettled in countless ways, including being unable to attend school. With no access to a proper education, these children of war grow up without skills needed to contribute to their nations and their economies, turning an already desperate situation into an even worse one.

Children who aren’t attending school become targets for exploitation and abuses, including being forcibly recruited to serve in the armed forces.

On 9th September, Princess Caroline was invited by Sheikha Moza Bint Nasser of Qatar, the UNESCO Special Envoy for Basic and Higher Education, in her capacity as Goodwill Ambassador for Education of Girls and Women, to a meeting held at the UNESCO Headquarters in Paris for the 3rd International Day for the Protection of Education against Attacks. The meetings centred around protecting children from losing their rights to an education in places where war is raging.

School attacks increased in 2020 and 2021 by a third over 2019, showing that the problem is worsening worldwide.

Additionally, Virginia Gamba, Special Representative for Children and Armed Conflict of the United Nations Secretary-General, made a point of highlighting the important work carried out by Monaco-based association AMADE, for the defence of children’s rights and particularly praised its programme A civil status for all.

This programme aims to register the identity of a child with the authorities, in order to allow them to be recognised as a subject by right, to benefit from a legal personality and to guarantee them the protection of their civil, political, economic, social and cultural rights.