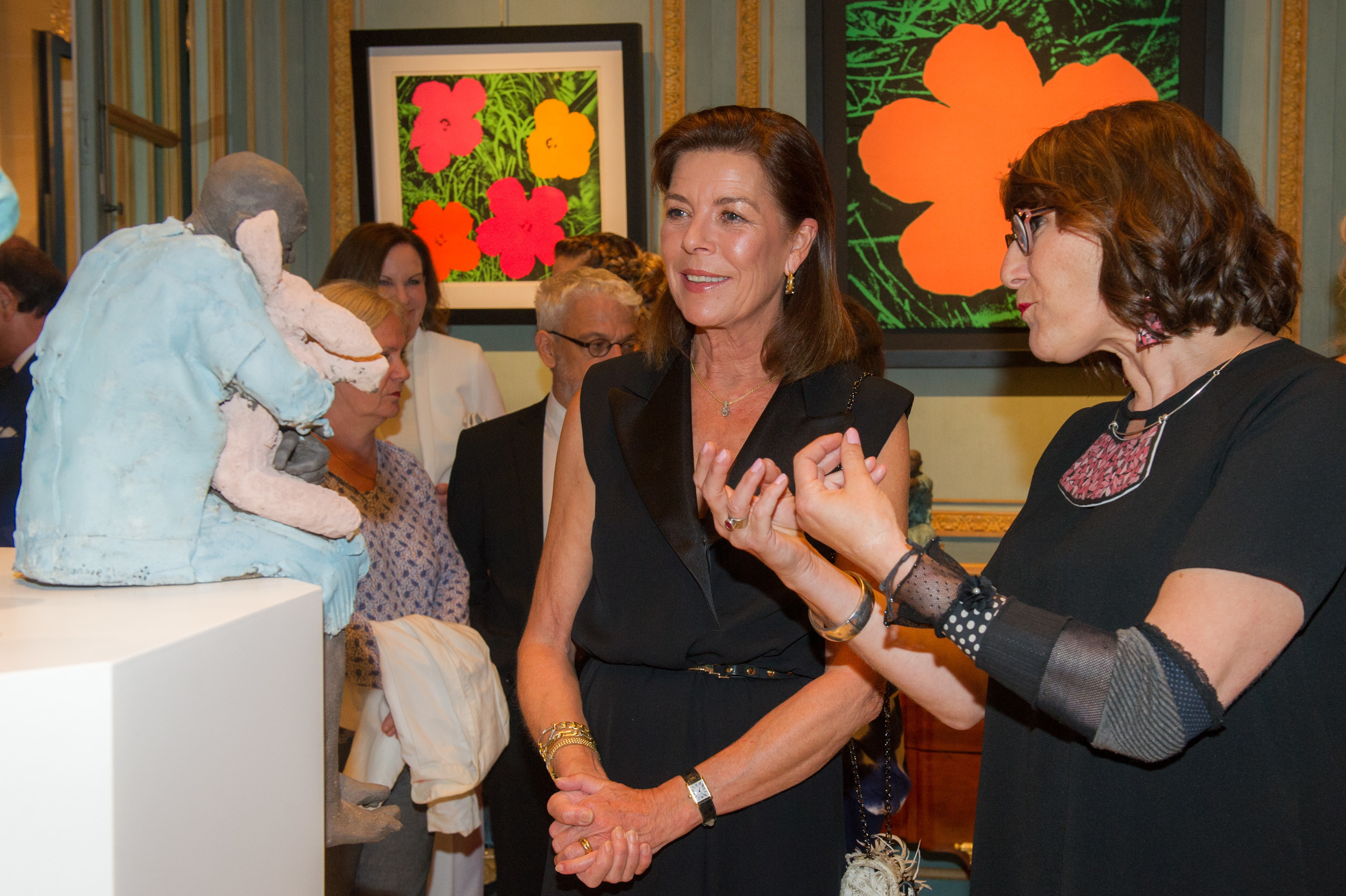 Galerie Adriano Ribolzi rolled out the red carpet Thursday evening for the opening of a two-week exhibition by Corinne Chauvet, winner of the GemlucArt 2016.

The Grand Prix d’Art Contemporain Gemlucart is an international competition under the Honorary Presidency of HRH Princess of Hanover and awarded by the Gemluc, the Group of Monaco Enterprises in the fight against cancer, which since its creation in 1973, has donated €1,920,000 worth of equipment to various hospitals, including the Princess Grace in Monaco.

Ms Chauvet exquisitely epitomises the 2016 theme, Explosion of Joy (“Fous Rires”), with her 44 clay sculptures and paintings, each of which offer an extension of the artist’s own enlightened disposition.

“I am honoured to win this award, but equally as moved by the warmth and welcome I have received here in Monaco,” Ms Chauvet, who studied art history and visual arts at the Paul Valéry University Montpellier and the University of Leicester, told Monaco Life. “And it’s wonderful that GemlucArt is in support of the fight against cancer.”

As an artist-in-residence, Ms Chauvet has been influenced from her time in León in northwest Spain, and the small pottery town of Shigaraki in Japan. “I didn’t know Japan at all when I arrived,” the award-winning potter shared. “I discovered an international community, with a mix of rich cultures and exchanges.”

She was also introduced to a population with kindness and warmth, which she says is a contrast to the French. “While the French have everything to be happy about,” she commented, “they are always complaining while in less affluent countries, people smile and support each other.” This distinction influenced her work.

Her serenity and ability to live in the moment is apparent in her Buddhist-like miniature sculptures, each of which tells a tale although Ms Chauvet says she does not attach a specific story to a specific work during the artistic process. “I want to create an energy that represents the Buddhist mentality and that speaks to people and makes them smile.”

This synergy is something the artist works on daily. “I nearly lost part of my arm in an accident four years ago,” Ms Chauvet shared. “I work with my hands and this was terrifying. But I was able to find inner peace at the possibility.” She said that ever since, she takes time every day to remind herself of what is important in life.

Ms Chauvet accompanied Princess Caroline on a tour of her work in the standing-room only gallery.

The 2017 edition – the ninth year of the competition – brings the work of a hundred artists to Monaco, and helps to raise money for clinical cancer research, support cancer patients and their families as well as to contribute to the prevention, detection, and care of the disease.

This year’s edition runs from October 11 to 16 at Auditorium Rainier III.
Observing from a corner his sister with Princess Caroline, Ms Chauvet’s brother was brought to tears. “Corrine has worked so hard, and we lost our father only two weeks ago. He would have been as proud as I am.”

Adriano Ribolzi: a man of art

Installation of solar panels at the Ecole...

Local News Staff Writer - November 6, 2018
Installed on the roof with a double exposure north-west and south-east, they will allow optimal solar capture.

Local News Staff Writer - May 1, 2018
https://www.youtube.com/watch?v=NzTrgKXkN5Y The Vendôme Art Gallery welcomes American artist David Syre for his first exhibition in Europe: "Cards of the soul: An artist on the way". Time spent in Nice and Monaco years ago became "the first step of a new path" for this artist whose exhibit, which opens on May 3 and runs until May 19, is dedicated to travel. Indeed, the 23 paintings, drawings and sculpture on show and created between 2013 and 2018 will serve as a map illustrating the different stages of the artist’s life. A self-taught artist, David Syre grew up along the Nooksack River. The son of Norwegian agricultural parents, he exhibited a remarkable resilience that would be emblematic of his life – overcoming polio at age four, going on to compete in marathons as an adult and building a successful business founding the real estate development Trillium Corporation in 1974, which became an international global investments business. Although a talented child artist, art was deemed an unacceptable career path. Later in life, Syre rediscovered his creative passion fulfilling his childhood dream of painting, and he now has a studio on the site of his family’s 100-year-old farm in view of the Canadian Cascade Mountain. During 2018, David Syre will exhibit in two other countries, the US and Argentina. Each of these destinations shares a common denominator: the concept of "the road" travelled by the artist. Thus, the themes of the exhibitions of Nice, Santa Fe and Buenos Aires will be different. In Nice (May) at 16 rue Emmanuel Philibert, the veil rises on the path of life of David Syre, Santa Fe (September) will explore the origins and development of humanity in time and in Buenos Aires (November), the works will be dedicated to configurations of femininity and masculinity in line with Ona culture. Each destination will lead to "The Peace Trail", the great project of the artist in Tierra del Fuego, Argentina.