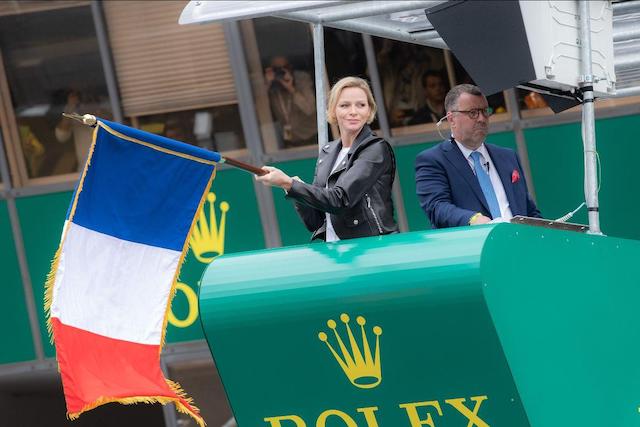 The 24 Hours of Le Mans Virtual will take place next month with a “Strong Together” Ferrari entered by the Princess Charlene of Monaco Foundation.
The event, which will be held on 13th and 14th June, will see 50 racers competing in a new way for a new world. The Princess’s Foundation is sponsoring car #54, with crew members Francesco Castellacci, Felipe Massa, Giancarlo Fisichella and Tony Mella taking to the course from the socially distant confines of home.
Princess Charlene was the official starter at the 87th annual 24 Hours of Le Mans in 2019. An estimated 250,000 spectators witnessed the race last year, and promotors are hoping for even more viewers this year.
“Being starter of the 87th 24 Hours of Le Mans was an unforgettable moment, and I am grateful to the Automobile Club de l’Ouest for offering me the opportunity to experience it,” said the Princess in a statement to FIA. “This year we forge more ties between Monaco and Le Mans, both well-known for motorsport, with the #54 Strong Together team that will be racing under the banner of my foundation and the flag of the Principality.”
The President of the Automobile Club de l’Ouest, Pierre Fillon, is delighted to have the Princess’s team racing. “I am particularly proud to receive this support from H.S.H. Princess Charlene of Monaco,” said Mr Fillon. “It is an acknowledgement of the importance of this race and the values that we defend. GTE is always a hotly disputed category and there is no reason to expect that to change in a virtual race.”
With the great success of the Virtual Formula One Grand Prix races, other racing events such as Le Mans are jumping onboard to give fans a taste of the action that the Covid-weary public are craving. They may even start making a habit of running their events in tandem with the real thing, once they are able to hold live events once again. For those not entirely convinced that the virtual races are as good as the real thing, the promoters encourage fans and casual viewers alike to check it out.
To watch the race in its entirety, visitors are asked to go online at https://24virtual.lemansesports.com/