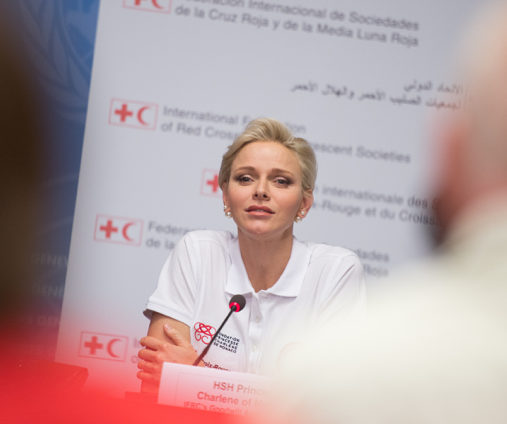 On Saturday, February 25th, the Côte d’Azur Racing Society is holding the “Prix Princesse Charlène de Monaco-Charity Mile” race at the Hippodrome in Cagnes-sur-Mer, the first ever Charity Mile in France.

The initiative comes from the benevolent HSH Princess Charlene, who wishes to show that Monaco’s charitable convictions extend beyond the borders of the Principality.

The Princess, who is known for her work in educating children about water safety through her Princess of Charlene of Monaco Foundation, is not unfamiliar with the concept of the Charity Mile; her father owns horses and participated in a Charity Mile in South Africa.

“This Charity Mile presents a unique opportunity for French racing to be giving back to society both here in the Cote d’Azur and abroad, supporting animal welfare, children and people in need,” HSH Princess Charlene told Monaco Life. “My thanks go to all those who have supported this exciting initiative and I praise the charities represented for their tireless efforts to make a lasting difference to the lives of others.”

Eighteen local charities, exclusively chosen by the Princess, will receive a sponsored donation during Saturday’s 1600-metre – One Mile – gallop race at 3:05pm, where each horse will be associated, by drawing lots, with a charity.

The draw to allocate each horse with a charity took place at the Monaco Yacht Club on Thursday, February 23, at 11 am, in the presence of Mr Gareth Wittstock, brother of Princess Charlene, and Mr François Forcioli-Conti, President of the Côte d’Azur Racing Society.

Saturday’s first edition of the Charity Mile – preceded by the first stage of the prestigious French racing challenge, the Défi du Galop – will bring together nearly 200 celebrities, business leaders, partners and charity representatives, with 23 companies and donors supporting the event. An awards ceremony at the end of the race, in the presence of Mr Wittstock and Mr François Forcioli Conti, and a contribution of €50,000 to the Charity Mile beneficiary charities are also part of the day’s agenda.

Saturday’s Charity Mile will be a fun-packed event starting at 1 pm, in the spectacular Hippodrome, just behind the boardwalk in Cagnes-sur-mer. Entry €4.50; parking is free.

The results are in for Monaco ClubSwan...

Sports Staff Writer - April 14, 2019
With no races on the final day of the Monaco Swan One Design event, the standings from previous days carried forward to final positions.