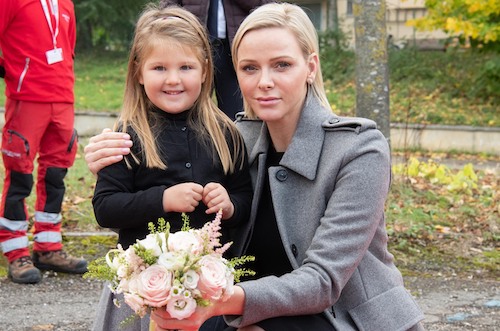 Princess Charlene travelled to the tiny mountain village of Isola del Gran Sasso in the province of Teramo in southern Italy to inaugurate the Parrozzani Primary School, which had been destroyed in November 2016 by an earthquake.

The new 1,000m2 school will be host to 200 students and its construction was a joint effort by the Monaco Red Cross, Italian Red Cross and several private partners and citizens.

Princess Charlene, who since 2014 is a recipient of the Knight Grand Cross of the Order of the Star of Italy, the highest honorific distinction given by the Italians, was awarded a gold medal by Italian Red Cross’s Vice President Rosario Maria Gianluca Valestro for her commitment and actions to the organisation and her continued humanitarian efforts.

She was accompanied to the opening by a group of children from the village, as well as by local dignitaries.

The former school, destroyed by a magnitude 5.4 earthquake quickly followed by two tremors measuring 5.7 and 5.3 respectively, is located in the Apennine Mountains in the Gran Sasso e Monti della Laga National Park, one of Europe’s most biologically diverse areas boasting more than two thousand plant species, some unique to the region, as well as several rare animal species.