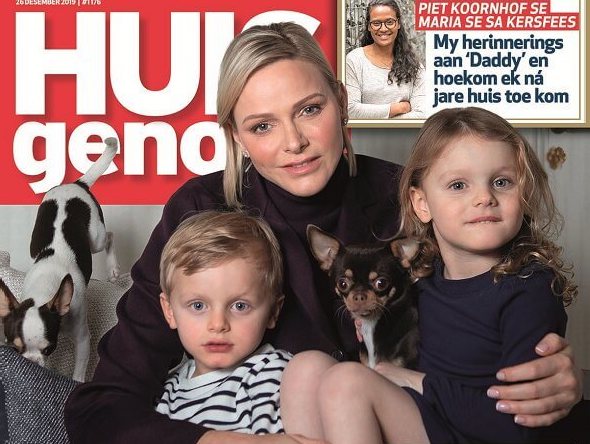 After enduring an incredibly painful year, Princess Charlene has opened up to a South African magazine about why she’s looked so sad this past year… and the reasons are touchingly normal.

The Princess recently spoke to Huisgenoot Magazine, a publication out of her native South Africa, to dispel rumours of discontent and set the record straight. Her admissions are honest and marked by the quiet gentleness she has been come to be known for.

The Princess reveals that her year has been marred by the deaths of two friends within the space of 10 days, and concern over the health of her father, Michael Wittstock, who is due to have surgery soon.

“Well, sometimes it’s hard to smile,” acknowledges the mother of two. “They don’t know what’s going on in the background.”

The heart of the issue is something that most expats have experienced at one time or another and can strike at any time… homesickness.

“I have the privilege of having this life, but I miss my family and my friends in South Africa and I’m often sad because I cannot always be there for them,” she says.

Princess Charlene and the twins, five-year-old Prince Jacques and Princess Gabriella, made their first visit to South Africa earlier this year to see her parents, and Jacques reportedly was impressed with the sheer size of the place, which she said was “moving” for her.

With that precedent set, perhaps her visits back will become more frequent and 2020 will be the year everyone gets to see more of Princess Charlene and her lovely smile.

Monaco’s neighbour Italy is finally getting a bit of good news on the coronavirus front as both the number of new cases and the death tolls begin to take a downward slide.

Photo: Facebook Gouvernement Monaco[/caption] The Town Hall has reminded Monaco residents that the Christmas Village remains open until Sunday, January 7, 2018 on the Port of Monaco. “And if the magic of Christmas is already behind us, the end of year celebrations continue with the transition to the New Year that is looming,” they said. DJs will be in charge of the musical entertainment: Manu Silvestri accompanied by a saxophonist and an entertainer, as well as Patrick Lemont, with two dancers. There will be two focal points for the New Year’s Eve celebrations, the largest one near the ice rink and the smaller one at the foot of the Big Wheel. Finally, the highlight of the evening, a large fireworks show, will mark midnight and the revelry is expected to continue until 2:30 am. The Christmas Village is accessible by five entrances: three on the upper part of the Boulevard Albert I, one from the North Darse and one from the South Darse. Special security checks will be in place. Light bags are recommended to simplify entry checks. Finally, the bridge of Boulevard Albert I is not accessible to the public.

Local News Staff Writer - May 1, 2019
The Jaguar I-PACE eTROPHY series heads to Monaco for round seven on 11th May 2019. Anthony Beltoise will be the Jaguar Racing VIP driver.