Princess Charlene says she is now “calmer” after traumatic year

Princess Charlene says she is now “calmer” after traumatic year

Princess Charlene has spoken publicly for the first time since resuming official duties, telling Monaco Matin that she now feels “more calm” although still fragile after a year marked by illness. Appearing at the Monte-Carlo Fashion Awards, the mother of two said that she was “delighted” to be taking Princess Gabriella to her first official mother/daughter event.

In an Instagram post on Tuesday evening, Princess Charlene shared a special photo of Princess Gabriella sitting on her lap, with the caption: “I loved every moment preparing my Princess for her first official event.”

The occasion was the Monte-Carlo Fashion Awards, of which Princess Charlene is patron, and it marked a rare solo outing for the pair. Gabriella’s twin brother, Prince Jacques, is always by her side when they accompany their parents to official events.

And it is clear that the little princess follows in the fashionable footsteps of her mother.

The event was the third official showing by Princess Charlene since she resumed her public activities on 30th April. It was also the first time she has broken her silence on the difficult year that now appears to be behind her.

In an interview with Monaco Matin’s Cedric Verany, the Princess said that her return to Monaco after eight months in South Africa due to complications from a severe ear, throat and nose infection was challenging.

“When I returned to the Principality, I focused all my energy on my children, my husband and my health because they are my priority,” the Princess told Monaco Matin. “My state of health is still fragile and I don’t want to go too fast. The road has been long, difficult and so painful. Today I feel more calm.”

The princess said that she found it “regrettable” that certain media had spread rumours of a divorce with her husband Prince Albert, adding that “Albert was very supportive, we discussed these malicious articles together and he did everything to protect me and our children.”

The Princess revealed that she was thrilled to be attending her first official mother/daughter event at Monte-Carlo Fashion Week, and that the young princess behaves like most little girls when it comes to dress-up.

“Gabriella, like all little girls her age, loves princess dresses, doing her hair and even trying on my lipsticks,” she said. “Gabriella has her own style and I like to encourage that individuality. This mother/daughter fashion outing for the Monte-Carlo Fashion Awards delighted me and we went on stage together for the first time.”

The princess concluded by saying that she was excited to take part in this weekend’s Monaco Grand Prix, revealing that Prince Jacques will be doing the lap of honour with his father Prince Albert for the first time, and that it will be a “great source of pride” for her and her husband. 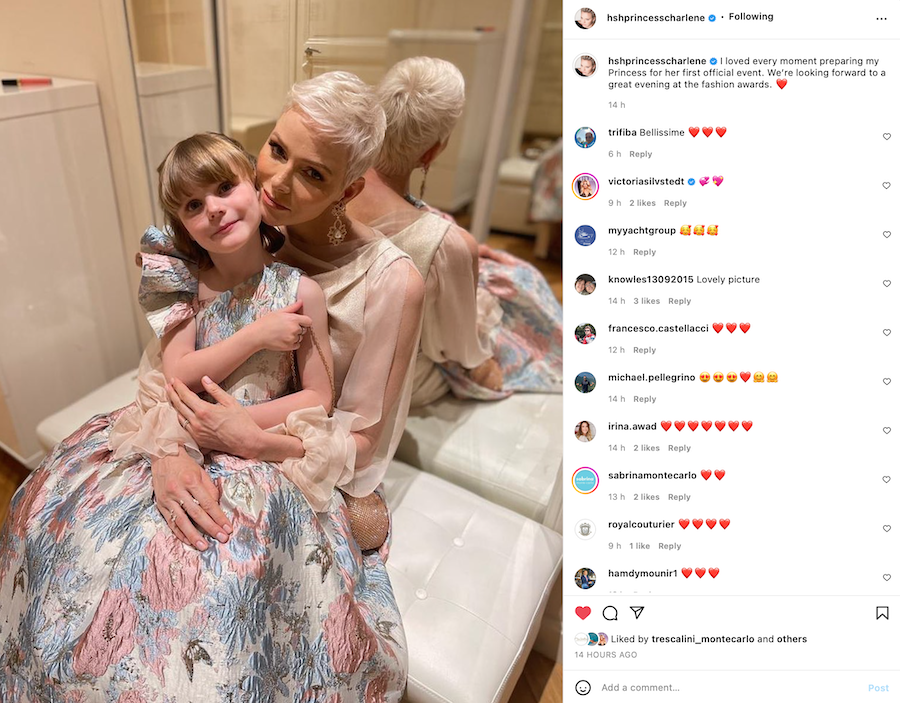