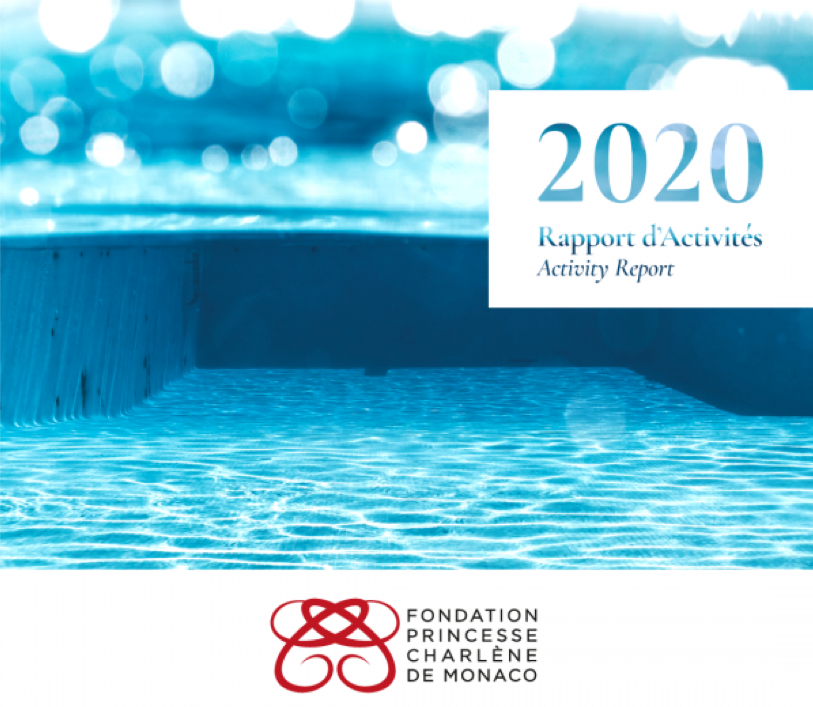 Despite the pandemic and all the restrictions that it brought, the Princess Charlene of Monaco Foundation was able to move forward with several key projects and programmes centred on water safety and drowning prevention, as well as putting on events, assisting in Covid prevention missions and welcoming a new ambassador.

The Princess Charlene of Monaco Foundation this week released its 2020 activity report, highlighting the programmes, projects and key moments from the previous year, notably several key missions in 17 countries, a mask distribution scheme during the height of the first wave of the pandemic, the Le Mans virtual race, the Monaco Water Bike Challenge and the welcoming of a new ambassador, Peter Sagan.

The main focus of the Princess’ Foundation has always been on water safety, and whilst the majority of the activities were geared for this, the pandemic gave them a chance to offer help in other ways as well.

“2020 was a strange year for the Princess Charlene of Monaco Foundation, as it was for many humanitarian associations and NGOs around the world,” said Gareth Wittstock, the foundation’s General Secretary.“Fortunes changed and swayed, initial disappointments gave way to hope, and missed opportunities quickly turned into brand new ideas for the future. They were trying times for everyone.

Princess Charlene herself reiterated her goals for the Foundation but acknowledged the limitations that 2020 brought.

“The primary mission of my foundation is to save lives by fighting against drowning, which results in an increasing number of deaths every year,” said the Princess. “Drowning rates continued to be of concern in many countries in 2020. Children had even more restricted access to pools and facilities enabling them to learn how to swim and to protect themselves against water hazards.”

The year in numbers

The Foundation, which was created in 2012, has since sponsored 398 projects in 38 countries around the world benefitting 864,465 individuals as of the end of last year.

The Foundation hosted drowning prevention and learn to swim missions in several countries, including in Burkino Faso, Bangladesh, Cameroon, Canada, France, Ghana, Senegal, Tanzania, Sri Lanka, Serbia, Greece, Sudan, South Africa, Cambodia and the USA. This was enhanced by the online drowning awareness programme launched in summer 2020, which reminded people of water hazards throughout the summer season and got 34,000 views.

Additionally, The Foundation supported projects centred on Sport and Education to promote well-being and good childhood development. To this end, they hosted ‘Education through the values of sport’ missions in South Africa, Georgia, Madagascar and Monaco.

The Foundation took a different route when the pandemic hit, and distributed masks to institutions and organisations who were in desperate need of PPE in the early days of the first lockdown. Additionally, the Foundation took part in the 24 Hours of Le Mans virtual race with their own team on the roster with team members Francesco Castellacci, Giancarlo Fisichella and Felipe Massa as well as a sim racer, Tony Mella.

The Calvi-Monaco Water Bike Challenge also returned despite the health restrictions, which pitted the Princess Charlene-led Team Serenity against Team Notorious, headed up by Gareth Wittstock.

Finally, the Foundation welcomed a new ambassador in the form of Serbian cyclist Peter Sagan. The three-time road race world champion joined the foundation as a face of the organisation and said at the time of his appointment that it was “an honour and a privilege for me to become an Ambassador of the Princess Charlene of Monaco Foundation and to contribute to its important mission.

Business & Finance Stephanie Horsman - May 9, 2022
After years of planning, the popular Swedish housewares super store Ikea is finally opening in Nice Saint-Isidore on 11th May, giving long-suffering shoppers a close and convenient option.

Business & Finance Stephanie Horsman - March 8, 2022
Monaco’s Permanent Representative to the UN has spoken out at an emergency session, condemning the aggressive acts of the Russians on Ukrainian soil, as per the sentiment of the Monegasque government.