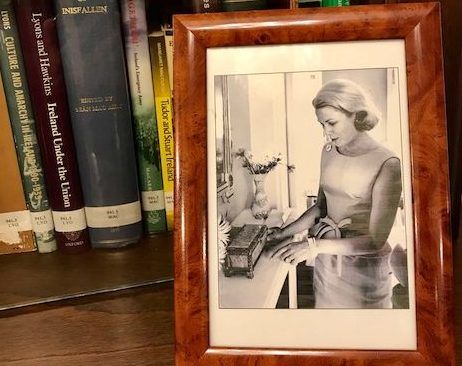 Looking for something to read the other day, a friend suggested I stop by Monaco’s Irish Library where I’d find an excellent selection of books in English.

Arriving at 9 rue Princesse Marie-de-Lorraine, I not only discovered a typical Monaco Ville-style villa, a former hôtel particulier of the Comte Felix Gastaldi family, but also that the Library was named after Princess Grace, who died in 1982.

Under the aegis of the Princess Grace Foundation, which was bestowed on Princess Caroline shortly after the death of her mother, the Princess Grace Irish Library was inaugurated in 1984 as a tribute to Grace Kelly’s origins (her father’s family was from County Mayo).

The Library is mobility-friendly with an elevator but the charming narrow staircase is inviting and leads you to a warmly decorated children’s room, which offers readers, from as young as three, a varied selection of picture books and DVDs as well as creative art activities.

In the adjoining room a wonderful collection of 9,000 Irish books, a selection from Princess Grace’s personal collection, as well as photos of the Princess and some of her personal keepsakes, are watched over by a full-length portrait of the Princess herself to complete this peaceful sanctuary.

The Library, however, is more than just books. It serves as a cultural centre with a permanent exposition of literary portraits by the famous Irish photographer John Minihan, including images of Paul Muldoon, Samuel Beckett, Seamus Heaney, Tom Murphy and many other relevant figures of Irish culture. There are bronze portraits of poets Oscar Wilde and William B. Yeats ,and a magnificent 19th-century Spanish silver Virgin font.

It’s clear that this Library is a vibrant homage to a beloved wife, mother and state figure, who continues to influence the people who loved and admired her.

Since 1997, the Princess Grace Irish Library has been working with the English department of Albert 1er high school next door, giving students the opportunity to view films, participate in workshops with visiting lecturers or writers, and to express themselves in artistic and contemporary topics.

Mainly funded by the Princess Grace Foundation, the Ireland Funds Monaco also supports the Library and, in 2001, created a Bursary for Irish writers and academics “to pursue their writing and research projects in the friendly surroundings of the Library” during a one-month stay in Monaco during spring and fall.

The Princess Grace Foundation, still under the patronage of Princess Caroline of Hanover, contributes to humanitarian initiatives that benefit children and help students through cultural projects. Young dancers at the Princess Grace Dance Academy in Monaco receive special grants and, in connection with Prince Pierre Foundation, annual prizes are awarded to young writers and musicians.

Of course, you can’t talk about the Princess Grace Foundation without mentioning the world-renowned Bal de la Rose (or Rose Bal), initiated by Princess Grace in 1954, which takes place every spring and, in addition to donations, is the main financial fundraiser for the Foundation.

The glamorous international charity gala, which took place this past Saturday in the presence of Princess Caroline, and three of her five children (Charlotte and Pierre Casiraghi, and Princess Alexandra of Hanover), also marks the first major socialite event of the year.

Leaving the Princess Grace Irish Library, a few borrowed books in hand, I felt as though I’d spent the afternoon catching up with an old friend, one whom I’ll visit again soon.

Take the No 1 or No 2 bus to Monaco-Ville (final stop at Place de la Visitation). From there, the Princess Grace Irish Library is a short walk along rue Princesse Marie-de-Lorraine, to the right of the chocolate shop Monaco. Open 9 am to 4:45 pm from Monday to Thursday, and from 9 am to 3:45 pm on Friday. The Library is closed during August.

Local News Cassandra Tanti - June 21, 2019
The MEB has presented its programme of events to 300 stakeholders in the Principality’s economy gathered for the 35th Members Rendezvous.