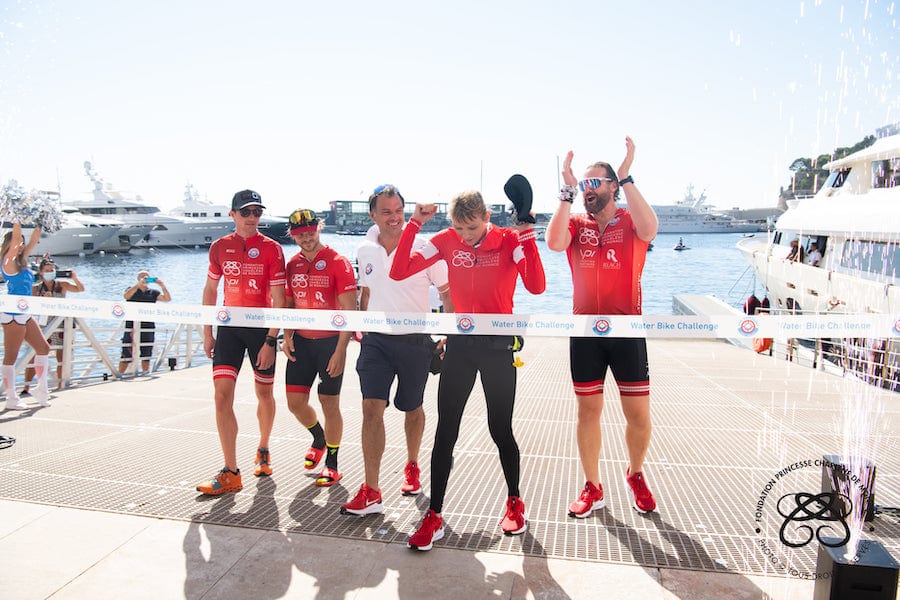 Princess Charlene has led her team to victory in the gruelling 24-hour water bike relay from Corsica to Monaco against her brother’s team ‘Notorious’, who was notably missing one of its star members.
Princess Charlene and team Serenity officially crossed the finish line at the Yacht Club of Monaco at 11.31am on Sunday, 22 hours and 33 minutes after setting off from Calvi.
Her children Princess Gabriella and Prince Jacques joined Prince Albert in cheering home their mother, together with a crowd of supporters.
The Notorious team, led by her brother and General Secretary of her Foundation Gareth Wittstock, crossed the finish line 14 minutes later.


The Crossing: Calvi to Monaco saw two teams of four internationally renowned athletes take turns to cycle 180 kilometres from Corsica to Monaco.
It kicked off in Calvi on Saturday amid “extreme” weather conditions, as Princess Charlene and her brother Gareth Wittstock led the charge, with the lead crossing between the two teams at various times throughout the race.
But within the hour mark of Monaco, Serenity took the lead and kept it right until the end.
The challenge wasn’t without controversy, however. World fighting champion Conor McGregor was forced out of team Notorious after he was arrested in Corsica on suspicion of alleged attempted sexual assault and alleged indecent exposure. The Irishman denies any wrongdoing.
“Conor Mcgregor vigorously denies any accusations of misconduct,” a representative for the MMA fighter told TMZ Sports.
McGregor was released on Saturday without being charged, his lawyer said.
He was replaced at the last minute by Guido Belinskis, who joined team Notorious with Gareth Wittstock, Jérome Fernandez and Kevin Crovetto.
Team Serenity was composed of Princess Charlene, David Tanner, Mathew Bennett and Brandon Green.
The aim of the challenge was to raise awareness of and money for the various projects of the Princess Charlene of Monaco Foundation.