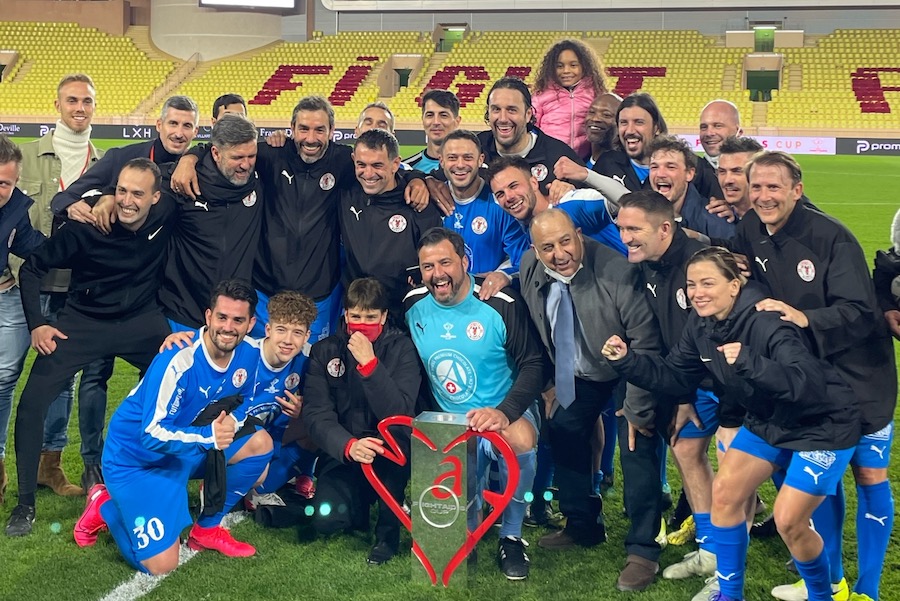 Stars of sport, both past and present, put on a brilliant sporting spectacle at the Stade Louis II on Monday to raise money in the fight against HIV.

Former Italian World Cup winning striker Luca Toni was the star of the show, his brace enough to give Princess Stephanie’s side the victory against the Barbagiuans of Prince Albert II.

After an extravagant entrance that involved the Monaco circus, proceedings were kicked off by Princess Stephanie and Prince Albert II, with a short pass within the centre circle marking the start of the match.

Both sides had chances to open the scoring in the first-half, as each team rattled the woodwork. Highly decorated midfielder Clarence Seedorf rolled back the years with some neat footwork and an impressive range of passing in the Cirque midfield, creating a flurry of opportunities, none of which were converted.

The Cirque band serenaded spectators with a jazzy half-time set-list, belting out the well-known pop anthems Happy and Despacito.

The second-half was a livelier affair. Ferrari F1 driver Charles Leclerc made his entrance mid-way through the half, but didn’t quite have the touch to break the deadlock.

It was Cirque who opened the scoring in the sort of comical fashion that wouldn’t have looked out of place in an actual circus. Toni, more of an accessory than an instigator of the goal, couldn’t believe it when the ball struck his back and rolled over the line following an attempted goalkeeper clearance.

Toni doubled up soon after, this time with a smashing drive from outside the box that left the keeper with no chance. A late consolation from the Barbagiuans wasn’t enough to prevent Princess Stephanie’s side from raising the trophy at 2-1.

Former Arsenal manager Arsene Wenger expressed his disappointment at having managed the losing team after full-time. “It’s difficult to have lost the match that we had under our control in the first half.”

Leclerc reminded us of the raison d’etre of this important match, saying to the press after the game, “It was a great match, and it’s for a good cause. We have to continue to fight against this virus, and at the same time we had a lot of fun, even if I’m bad at football!”

The Ferrari driver also told Monaco Life that the event was good for his preparation going into the new season. “The match plays a part in my programme. I have plenty of things on the go. I’m not only doing this, but for sure it compliments it nicely.”

The event brought together elite-level names from the world of football and beyond for an exciting footballing festival for all who attended, whilst continuing to raise awareness and funds in the fight against HIV.