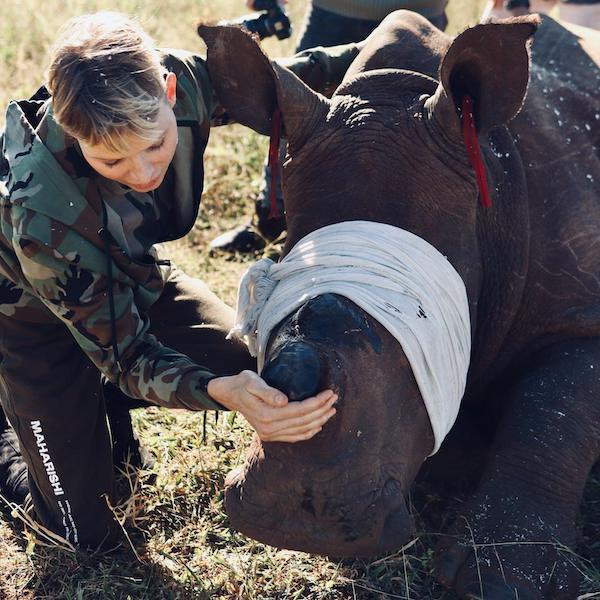 Princess Charlene’s efforts to support rhino conservation work in South Africa have been revealed through a series of moving photographs by wildlife photographer Christian Sperka.
The photographs have been released publicly on social media and show a visibly upset Princess of Monaco watching on as conservationists remove the horn of a rhinoceros in order to protect it from poachers. Princess Charlene is also captured soothing the animal after it has had its horn removed.


Shockingly, one rhino is killed for its horn every 22 hours in South Africa. Dehorning is considered the only real way to protect them.
At the start of the 20th Century, 500,000 rhinos roamed the world. By 1970, the worldwide population fell to 70,000. Today, the number of surviving rhinos in the world amounts to only 28,000.
Four of five rhino species are now threatened with extinction, and three of those are critically endangered, meaning they could go extinct in our lifetime.
The reason: poaching figures have hit record highs to meet the demand for horn on the black market.

Christian Sperka is a wildlife photographer based in South Africa, who has spent the last decade travelling the world photographing animals in wild game reserves. He is a resident photographer at Thanda Safari, Kwazulu Natal, and has been involved in various conservation projects since 2002, including Panthera, a global organisation focused on the preservation of all wildcat species.

People can support the International Rhino Foundation, whose mission is to ensure the survival of rhinos through strategic partnerships, targeted protection, and scientifically sound interventions, by donating to: https://rhinos.org/donate/