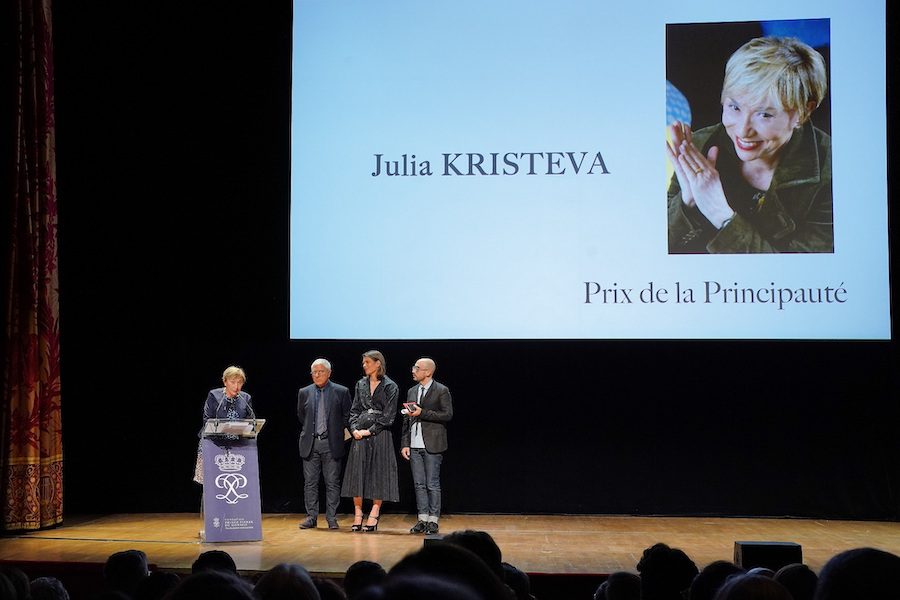 Julia Kristeva has been awarded the Principality Prize 2021 jointly by the Philosophical Meetings of Monaco and the Prince Pierre of Monaco Foundation during a ceremony on Tuesday.
Julia Kristeva, born in Bulgaria, has worked and lives in France since 1966. She is a writer, psychoanalyst, professor emeritus at the University of Paris VII – Diderot and full member of the Psychoanalytic Society of Paris. Among her long list of achievements, she has been awarded Doctor Honoris Causa by many universities in the United States, Canada and Europe where she teaches regularly. Commander of the Legion of Honor (2015), Commander of the Order of Merit (2011), first laureate in December 2004 of the Holberg Prize (created by the Government of Norway to remedy the absence of the human sciences in the Nobel list), she won the Hannah Arendt Prize in December 2006 and the Vaclav Havel Prize in 2008. She is the author of some 30 books, including The Revolution of Poetic Language, Stories of Love, Powers of horror (essay on abjection), Black Sun (depression and melancholy), Sensitive Time (Proust and the literary experience), the trilogy The feminine genius: Hannah Arendt, Mélanie Klein and Colette, La Haine et le Pardon, This incredible need to believe, Pulsions of time, Marriage considered one of the fine arts (with Philippe Sollers), as well as novels including Les Samouraïs, Meurtre à Byzance, Thérèse mon amour, L’Horloge enchantée. Her work is fully translated into English, and most of her books are available in the major languages ​​of the world.
The Prince Pierre Foundation and the Founding Members of the Philosophical Meetings jointly undertake to award the Principality Prize each year to an author for all of their philosophical work.
A life of writing in philosophy is therefore honoured, a singular work which has opened up new avenues in the field of philosophy and initiated different approaches to science, politics, theology, history, anthropology, ethics or psychoanalysis.
The laureate of the Principality Prize is invited to give a conference the following year during the awarding of the Prize.