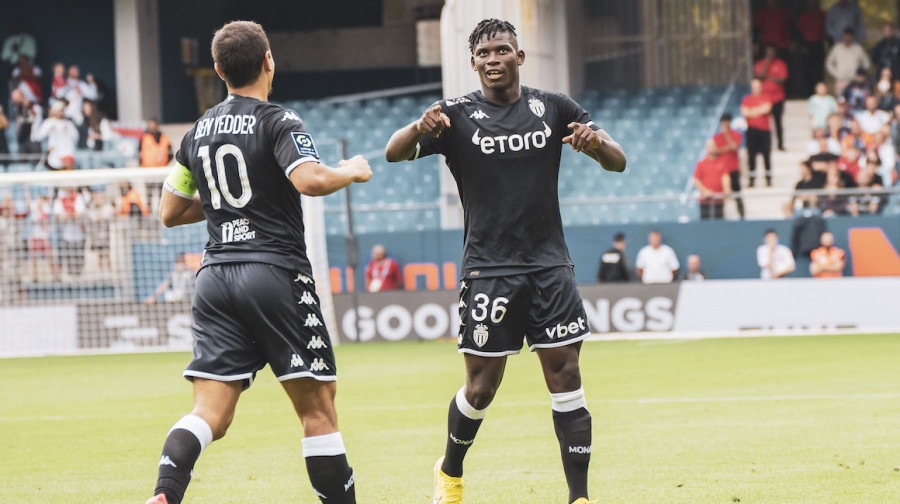 AS Monaco came out comfortable 2-0 victors against Montpellier on Sunday, stretching the club’s Ligue 1 winning run to five games and further closing the gap between the league leaders.

Monaco’s fifth consecutive Ligue 1 victory and sixth victory in seven games in all competitions, confirms the Principality side’s positive momentum. Not only that, but it also brings them to within three points of the podium, and only six points off league leaders Paris Saint-Germain.

Despite the quick run of matches, Monaco lined up almost unchanged for the fixture, with Maghnes Akliouche for Krépin Diatta the only difference from Thursday’s starting 11.

However, if there was any fatigue it certainly didn’t show. Whilst Monaco struggled to create clear-cut opportunities in the first half, they showed an impressive level of defensive solidity, against a side that always looks dangerous on the break.

Philippe Clement’s side, like their opponents, looked most dangerous in the transitions, with Breel Embolo central to much of Monaco’s attacking threat. The teams looked set to head back to the dressing rooms level, but as Wissam Ben Yedder controlled a cross, Embolo steamed in to smash home the opener.

The second half largely reassembled the first. Monaco were solid, and conceded just a single shot on target. However, they struggled to kill the game off. Embolo’s replacement, Myron Boadu was a bright spark when he came on, and his clever touch played in Ben Yedder, who couldn’t beat the goalkeeper when 1-v-1.

Failing in his attempts to play the role of the provider, he turned scorer late on. Caio Henrique’s pass across goal was met by Boadu, whose poke at the near post beat the goalkeeper. That goal killed off the game, and the match finished 2-0.

Despite bemoaning the quick turnaround between the tie against Trabzonspor on Thursday, and Sunday’s tie at La Masson,  in both the pre-match and post-match press conferences, Clement was full of praise for his side.

“I am very happy to win this match. The victory is deserved. My players were disciplined and well set up. There were also good things with the ball. We were lacking a bit of freshness up front but with the run of matches, that’s norma,” he said.

The Swiss striker dominated both of Montpellier’s centre-backs from the first minute until his substitution in the 73rd minute. He attracted fouls, including a yellow card for Maxime Estève in just the 11th minute, linked-up Monaco’s attacks, and was decisively clinical in front of goal.

Embolo’s beginnings surpassed many people’s expectations. In 15 appearances in all competitions, he now has five goals and four assists. But his influence isn’t purely numerical, his intelligence and strength get the best out of those around him, and that was the case again on Sunday.

He, like strike partner Ben Yedder is becoming quickly undroppable. Boadu’s brief cameo further bolsters Clement’s attacking arsenal ahead of Thursday’s trip to face Turkish champions Trabzonspor, where there will almost certainly be a degree of rotation to this winning side. 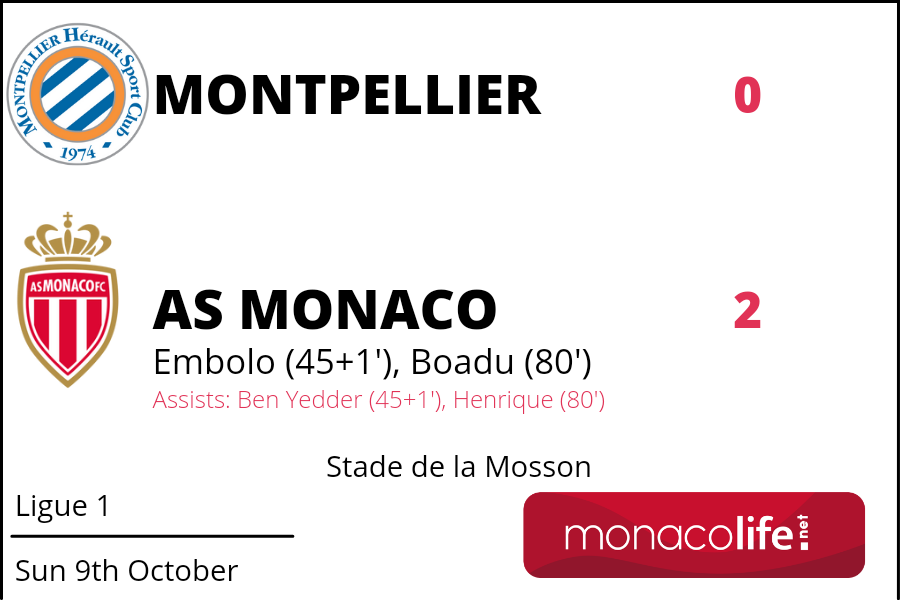