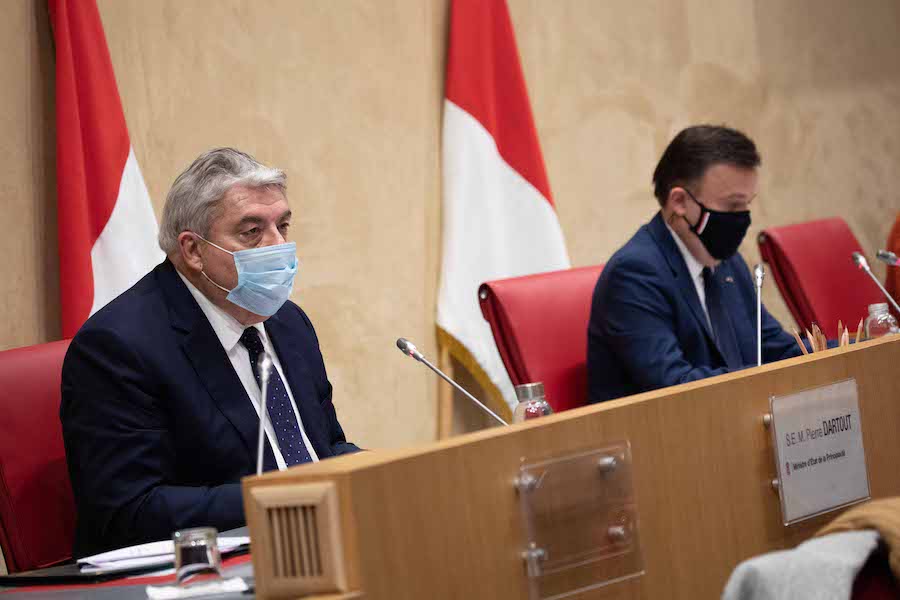 Minister of State Pierre Dartout has revealed during a National Council assembly that the public can expect the first of three Covid vaccines to be rolled out in Monaco next month.

The Covid pandemic topped the agenda of the National Council meeting on Thursday, and of particular interest was Covid inoculations. The Minister of State, Pierre Dartout, laid out the plan noting that the availability of the jabs will be different according to the maker.

He estimates the first rollout will be in January and February, using the Pzifer-BioNTech vaccine, then in March and April with Astra Zeneca, and by year’s end, the Sanofi Pastuer vaccine will be added to the arsenal.

“We are positioned to have all types of vaccines when they benefit from the authorisations of the health authorities. We have also ordered the essential equipment for their storage,” Dartout assured the Council. “The participation subscribed for this summer provides for the pre-purchase of 15,600 doses (two per person) for 7,800 people corresponding to 20% of the national and resident population. This is a first step.”

With regard to concerns over supply and administration, he confirmed that, “We have logistical and supply support from our French partner within the framework of the Franco-Monegasque health assistance agreement.”

The vaccines will be free of charge to residents, the Minister assured the assembled group.

Other health news showed a sunnier picture than in previous weeks, with Dartout laying out the latest statistics. “30 positive cases have been detected in Monaco during the past week against 120 during the first week of November. The incidence rate, that is, the number of positive cases per 100,000 population over seven days, is 78.95. It was 315.79 in the first week of November. The number of patients in intensive care at the CHPG is three compared to six at the beginning of November.”

The Council requested that a large-scale testing programme be implemented at the end of the holiday period to help keep the virus in check, as well as the continuation of curfews and obligatory mask wearing.

Dartout indicated that a free screening without medical prescription will be offered at the Espace Léo Ferréupon appointment from 15th December to students returning to the Principality, for teachers of school children,and residents during and upon return from Christmas holidays. Over 20,000 tests have been bought by the government in anticipation.

Self-isolation solutions were also discussed for those who are not infected, but have a person in their household who is, and the Novotel has agreed to house them at preferential rates, the cost of which will be borne by the state.

The government is still encouraging working from home when possible and has assured the Council that economic measures to support those financially impacted by the crisis will continue.

Amongst other topics on the table were a maritime shuttle plan between Cap d’Ail and Nice for summer 2021, a parent educational plan to alert them to the signs of addiction in their children, gender equality in the administration and the 2021 budget.

Lifestyle & Wellbeing Cassandra Tanti - August 14, 2021
The government has announced the death of an 89-year-old resident, marking the 35th Covid-related death in the Principality. It came just a day after the death of a 75-year-old.

Lifestyle & Wellbeing Cassandra Tanti - September 5, 2021
In what is a very rare sight in Monaco, hundreds of people took to the streets on Saturday to protest against the mandatory health pass in the Principality.