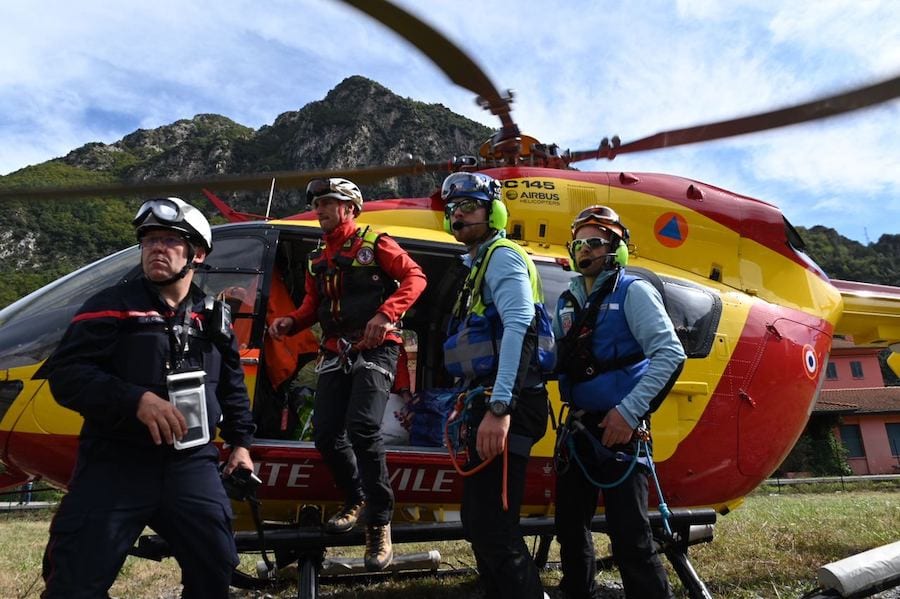 French President Emmanuel Macron has toured the towns devastated by storm Alex as Monaco continues to do its part for the victims in Vésubie, Tinée and Roya valleys.
Five days after disaster truck, and relief operations continue in the Alpes Maritimes and Liguria, with a total of five bodies recovered since Sunday.
More than 1,000 rescuers are involved in search operations and delivering aid to communities devastated by the floods.
Eight people are still missing while the number of suspected disappearances – people who have not been heard from since Friday – was at least 14 on Wednesday.
Three towns remain inaccessibly by land – Tende, La Brigue, Saorge and Fontan.
French President Emmanuel Macron visited Tende and Breil on Wednesday afternoon, before heading to Saint-Martin-Vesubie.
The government has confirmed a state of natural disaster for the affected towns, facilitating compensation claims.
After a request by the Alpes-Maritimes Regional Health Agency, the Monaco government said on Wednesday that it will be sending 45 nurses and caregivers from the Cardio-Thoracique Center and the Monaco Red Cross to support the Tende Hospital.
https://www.facebook.com/721217880/videos/10158532466712881/
On Tuesday, Minister of State Pierre Dartout announced to the National Council that Monaco would be giving €4 million to relief efforts, to be allocated evenly to each affected French town, as well as to Ventimiglia and the Italian side of the Roya river.
Mayor Georges Marsan and members of the Council will also be making a financial donation to the Department of the Alpes Maritimes to contribute to the reconstruction of infrastructure.
Numerous support efforts are currently underway in Monaco, and the Mairie is now setting up a special collection point at the Espace Léo Ferré on Thursday and Friday welcoming all foodstuffs, hygiene products and other everyday items.
The Unité Légère d’Intervention et de Secours (ULIS) will be responsible for distributing the items to affected communities.
The collection point will be open from 9am to 5pm on Thursday, and 9am to 2pm on Friday.
It is requested that only the following items be donated:
Foodstuffs, Flour, Salt, Sugar, Yeast, Preserves (tuna, pâté, peas …), Pasta, Rice, Lentils, Compotes, Sweets / chips / peanuts, Cereal bars, Cereals, Biscuits, Tea, Instant coffee, Chocolate powder, Jam, Water (still & sparkling), Milk, Fruit juice boxes (large and small), Hygiene products, Soap, Shower gel, Shampoo, Baby & adult diapers, Female hygiene products, Toothbrush and toothpaste, Tissues, Deodorant, Toilet paper, Hairbrush – comb, Candles – lighters, Matches, Camping tableware (cutlery – plates – glasses), Flashlights with batteries, Dry food for animals, Notebooks / Coloured pencils Coloring pages, Scotch, Markers, Ballpoint pens, Pencils, Erasers, Scissors
People wishing to donate other types of food and non-food products other than those listed above can contact the Ulis association directly on 06 60 10 87 68 / http://ulisfrance.fr/contact.php