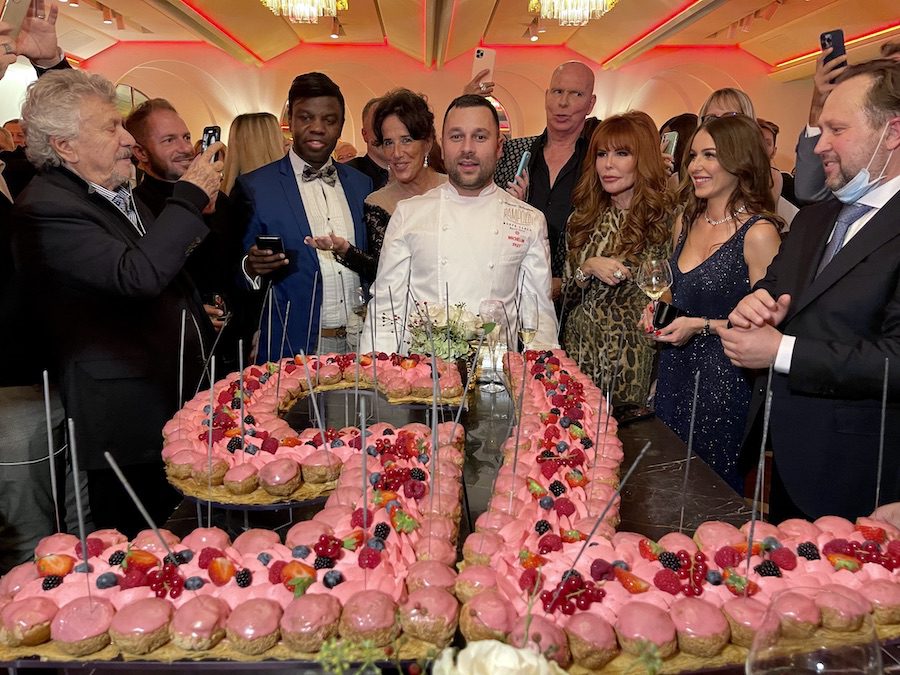 Prince Albert joined in the 75th anniversary celebrations of Rampoldi on the weekend, one of the Principality’s oldest restaurants and “a part of Monaco’s history”.

For three quarters of a century, Rampoldi has been an emblem of Monte-Carlo’s fascinating lifestyle, welcoming the Princely family and Monegasque personalities into its warm embrace.

Since 2016, Chef Antonio Salvatore has been at the helm, keeping this Monegasque institution on its path of producing fresh, Italian cuisine using iconic produce from southern Italy and scents of the Mediterranean.

On Saturday 16th October, guests were invited to celebrate the important milestone with Chef Salvatore and his team. The gold-speckled champagne flowed as the chef welcomed Prince Albert to the celebration, presenting him with a copy of the Rampoldi book published in commemoration of the restaurant’s 75 years.

Prince Albert thanked the crowd for “celebrating this wonderful place that is a part of Monaco’s history.”

With its Carrara marble, Murano lighting, crystal chandeliers and mirrored arches, Rampoldi has “just the right amount of Monegasque bling-bling”, according to the coveted Michelin Guide.

In 2021, La Table d’Antonio Salvatore, located underneath Rampoldi, was awarded its first Michelin star just a year after opening, marking a new chapter in the restaurant’s history.

Business & Finance Stephanie Horsman - December 21, 2021
The last legislative session of 2021 was opened with the amendment to the Financial Activities Act of 2007, with a heavy focus on crypto currencies.

Photo: Facebook Festival de Cannes[/caption] The Cannes Film Festival, which opened on Tuesday, May 8, and runs until May 19, is making only a symbolic show of getting into the #timesup spirit. Attendees at the annual celebration of film have received fliers containing a message in French stating :“Good behavior is required” and adding “Don’t ruin the party. Stop harassment. The pamphlets included in the festival bags also have a hotline number for victims of sexual harassment or misconduct, or witnesses to report aggressors. The pamphlet has an illustration of a bow-tie and sports the hashtag #NeRienLaisserPasser, which roughly translates into Don’t Let Anything Happen. Cannes attracts thousands of film buyers, sellers, creatives and press from all over the world but, as the showbiz magazine Variety points out, many do not speak French. However, the flier does not have any translations, Variety complains. Festival director Thierry Fremaux told Variety last month: “Cannes cannot be a substitute for the justice system or police: There are laws against harassment and sexual assaults and we will remind people of them … But yes, we are thinking about communicating on a larger scale about issues of safety and good behaviour, through education. There are many organisations which do wonderful work which we would like to promote.”