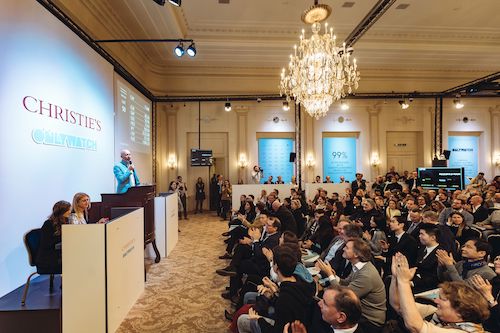 99% of the proceeds from the auction go directly toward independent research projects aiming to put an end to Duchenne muscular dystrophy, a particularly destructive genetic disease which strikes one in 3,000 male births. There is no cure and the average life expectancy is 26, however thanks to new research – assisted by funds raised from the auction – strides have been made and many are now living into their 30s and 40s.

“I want to state how proud I am of the progress we’ve achieved thanks to our collective effort on Only Watch,” said HSH Prince Albert II, who lends his name and support to the auction. “Monaco has been the epicenter of this beautiful initiative, pioneering in innovative ways to fund research and have it move faster and further in a more collective way. And today, thanks to you, we are on the verge of clinical trials for a cure for Duchenne Muscular Dystrophy, with researchers working in symbiosis in Monaco, France and Switzerland, giving hope to thousands of boys and men around the world. (…) To all supporters of the cause, you have my gratitude.”