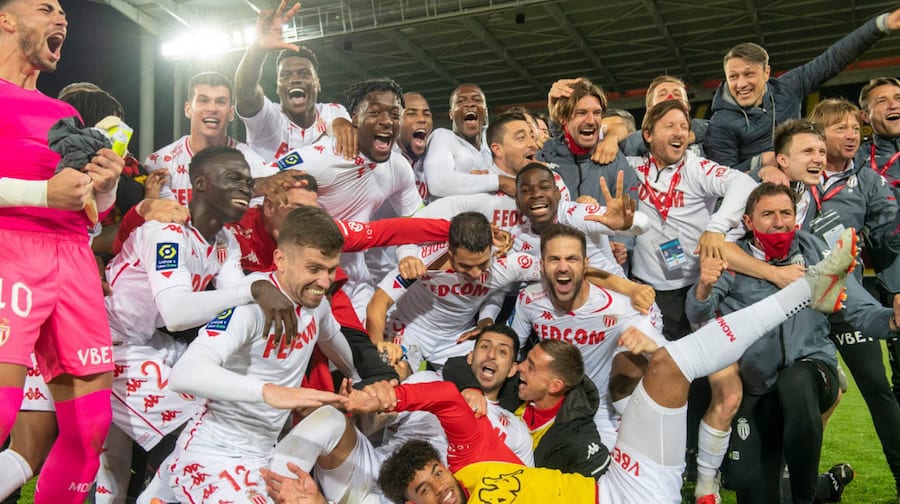 Following a three-year gap, AS Monaco are back in the Champions League after a draw with Lens on Sunday sealed their third place spot in Ligue 1.
Their nil to nil draw against Lens on Sunday left them two points ahead of fourth ranked Lyon, who lost to Nice, giving them just the edge they needed to hold onto third place.
“It was an intense fight until the end, so it is with satisfaction that we see this exercise come to an end on the podium, an encouraging end result, after a very good second part of the championship,” said ASM President Dmitry Rybolovlev after the match.
“Added to the route in the Coupe de France, this result validates the direction we have taken. I would like to congratulate the players, the staff and the whole club for all the work accomplished this season with a lot of rigor, energy, enthusiasm and ambition.”
Monaco dominated the ball in the first half, though were unable to make any conversions. Benoit Badiashile had the first chance at nine minutes in when he had the benefit of a free kick, but it was flagged off. Wissam Ben Yedder and then Gelson Martins had near-misses a few minutes later in the 13th and 19th respectively. Kevin Volland looked like he would open scoring at the half hour mark, but this too was blocked by a very bust Lens goalkeeper. By the end of the first half, Monaco had possession 65% of the time, but no goals.
Lens made a comeback in the second half when Seko Fofana nearly snuck one past Benjamin Lecomte, but happily for Monaco he was on the case. The game ended with no score, but that was enough for the team to hold onto their advantage and return them to the Champions League.
The normally reticent Coach Nico Kovac expressed his joy at the outcome, declaring, “We are all very happy. I am very proud of my players because we have had an incredible season. We played a Coupe de France final against PSG and we finished third in Ligue 1. Nobody expected that from AS Monaco at the start of the season. But it’s well deserved from my perspective. Even today we had a superb performance against a great team from RC Lens, whom I congratulate on their season. You will be able to see on social media that we celebrated wholeheartedly.”