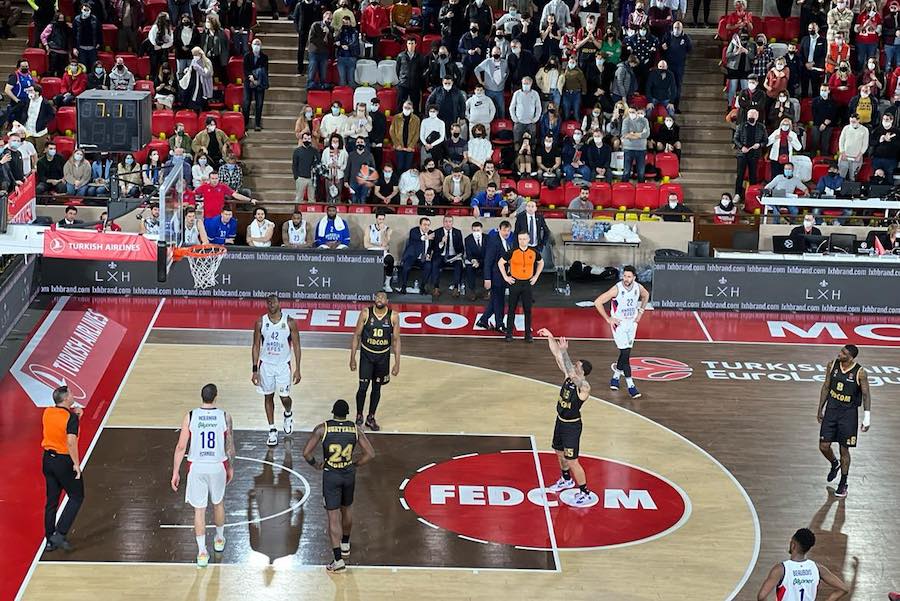 Turkish side Anadolu Efes are the latest team to come away from the Principality short-changed, as the Roca Team produced some season’s best basketball to secure a huge win (102-80).

3,400 packed into the Salle Gaston Medecin on Friday to witness what French player Yakuba Outtara described as their “best match of the season”. The result leaves AS Monaco Basketball on the brink of the play-offs in ninth, with just four games remaining in the European season.

If they are to make those play-offs, this is the model performance which they must emulate over the coming weeks. Winning every quarter, Monaco took the reins of this crunch clash and didn’t let go, exorcising those game-management demons that have haunted them for large parts of the season.

The match began with an exhibition of outside-of-the-key scoring as over 46% (12/26) of both side’s three-point attempts found the hoop. The Roca Team advantage was constructed through some aggressive defending, which allowed for a handful of easy counter 2-pointers, as Anadolu failed to reach the 20-point mark in either of the opening two quarters.

This was also a match in which every single Monaco player chipped in with points, leading Alpha Diallo to telling Monaco Life that, “It was a really good game for us collectively. It felt like everything was clicking.”

Diallo’s points-haul was significant in itself and is another sign of a player that is growing in confidence on this run-in. “I feel like I’m improving game-by-game, and the more I’m on the court, the more confident I feel.”

The star performer, however, was undoubtedly point-guard Mike James who was the source of 27 points on the night, including nine in just three minutes during a third-quarter blitz. Should the American maintain this current form, he could be pivotal in deciding the Roca Team’s fate.

Monaco continued to dominate in the second-half and further extended their lead, eventually breaching that 100-point mark whilst leaving the Turkish side trailing in their wake. A 22-point gap by the final buzzer was a fair reflection of the home side’s dominance (102-80).

Post-match, coach Sasa Obradovic was emphatic in his positive appraisal of his side’s performance. “Quite simply, it was our best match. We had good cohesion and I didn’t believe we could get back the goal average before the meeting.”

The side’s thoughts now turn to maintaining this level. Diallo told Monaco Life that the team’s objective remains unchanged. “The top eight has always been the goal, and we’re going to keep fighting for it.” If not for the voiding of the games against Russian opposition, the Roca Team would have already pierced into those play-off spots, but Diallo isn’t focusing on what could have been. “It’s a tough situation, but we’ll take whatever comes. We’ll just play the games we have to play.”

For now, attention returns to the domestic division with three ties in succession before the next Euroleague fixture. The Roca Team hosts Roanne on Sunday and Strasbourg on Wednesday, before a trip to Paris next weekend. 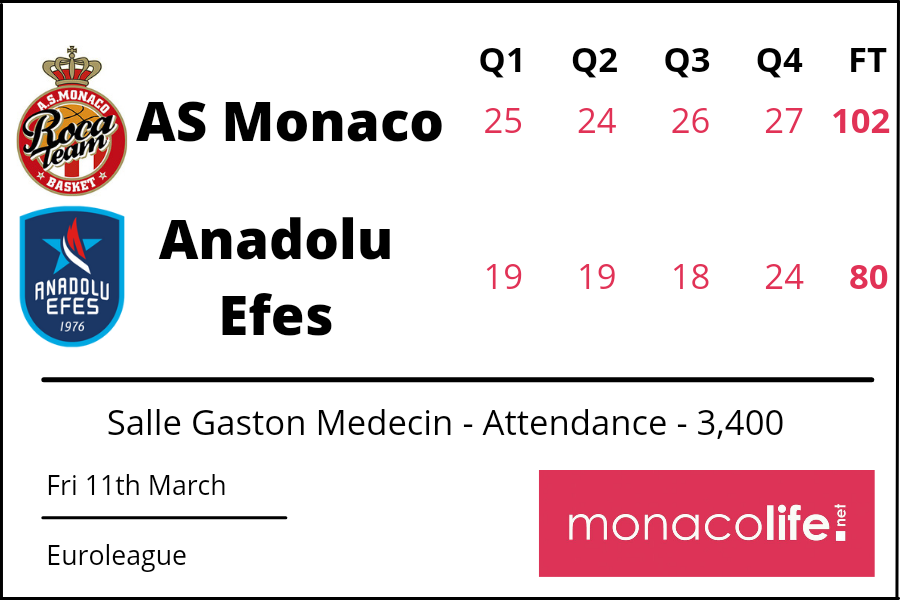