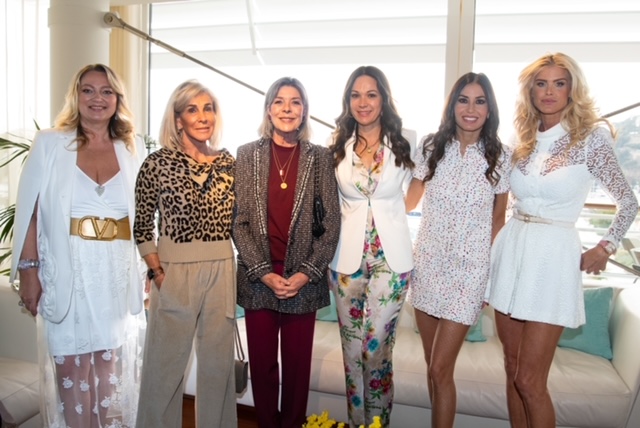 The 3rd edition of the Women of Monaco Lunch brought together 60 remarkable women from different countries, fields and backgrounds to celebrate the passing of International Women’s Day at the Monaco Yacht Club.

The guest list reads like a who’s who of the Principality, with the enduringly chic Princess Caroline, model Victoria Silvstedt, businesswoman and filmmaker Lady Monika Bacardi, Elisabetta Gregoraci, and Princess Antonella of Orleans-Bourbon amongst a cast of glittering and accomplished women meeting up for a luncheon organised by 5 Star Events on 8th March at the Monaco Yacht Club.

Sixty women in all came together for International Women’s Day and were recognised for their collective and individual achievements and giving special notice to those who have gone above and beyond through the awarding of the Women of Monaco Award.

This year, there were five winners starting with Rita Caltigirone-Rovelli in the Art and Culture category for her Monaco Project for the Arts, a non-profit association supporting arts and education. Under the Charity heading was Donatella Campioni for her work as President of Monaco Aide and Presence, which carries out humanitarian and charitable actions around the globe with special emphasis on children in need. The Image Award went to model Victoria Silvstedt, who has spent a lifetime cultivating her talents in the fields of acting and singing. Lady Monika Bacardi was honoured with the Entrepreneur Award for her many endeavours in the world of film, business and art patronage. And Oxana Girko won the Green Award in recognition of her last international project to reduce plastic pollution on the planet by creating a new formula of plastic that dissolves after use.

The theme of the lunch was Capri, which tied in beautifully with creations by Maison Chantecler Capri and was attended by CMS Monaco Christine Pasquier-Ciuilla, a founder of the prestigious family law firm.

The event was rounded out with a hint of what’s to come in spring trends, with a fashion show put on by stylist Oscar Scirè.