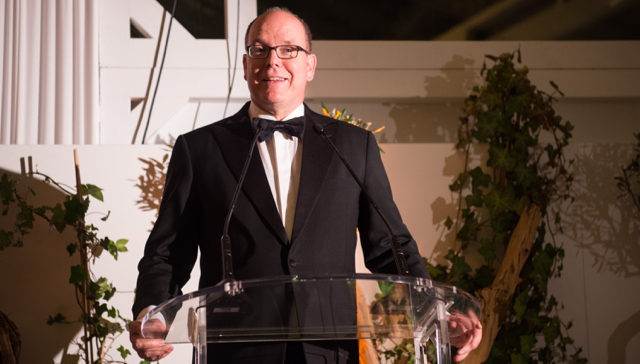 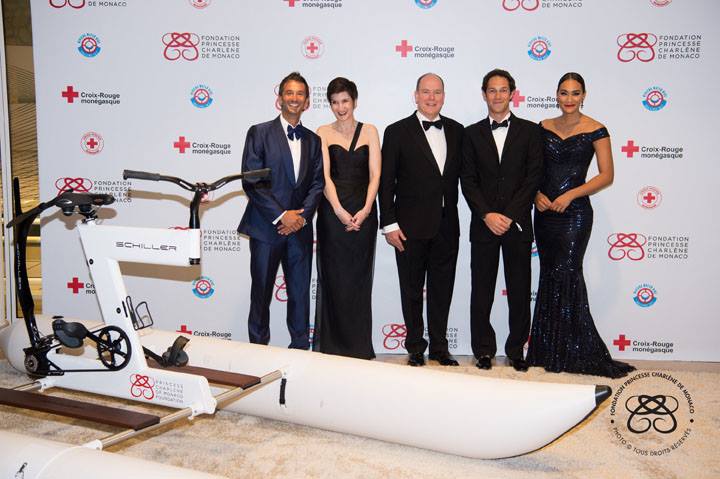 As Monaco Life reported earlier this month, a world first sporting event will take place in Monaco on June 4, thanks to an initiative by Princess Charlene. The Riviera Water Bike Challenge (RWBC) is the first relay race of its kind on water, covering 21 kilometers between Nice and Monaco using Schiller S1 water bikes.

The charity challenge is in support of the Princess Charlene of Monaco Foundation’s project in Burkina Faso, and in partnership with the Monaco Red Cross and Burkina Faso Red Cross, to put into service an aquatic rescue centre.

The major fundraising event to support the RWBC was a gala dinner held in the presence of HSH Prince Albert at the Monaco Yacht Club on Friday, March 24.

In addition to the limited number of gala tables, available in three packages – Ruby, Sapphire, and Diamond – there were also three separate auction elements to raise funds for the Foundation.

Until 5 pm Friday, there was a silent online auction of 17 Lots, including tickets to the Wimbledon 2017 Men’s Final, a Michael Schumacher Gold Anniversary Helmet, Rafael Nadal’s tennis racket, a training session with Paula Radcliffe, and 2 passes to access the Monaco Grand Prix Fairmont Hairpin.

In addition, there was a live auction on the night involving 8 Lots ranging from sports (HSH Prince Albert II’s Olympic shoes and Nico Rosberg’s Mercedes Benz Racing Suit) to art (last photograph of Charlene Wittstock before she got married, signed by Julian Lennon) to South Africa (Nelson Mandela’s handprints).

Finally, guests had the opportunity to bid for a place on a specific Riviera Water Bike Challenge team. In total there will be 10 teams, each made up of 2 celebrity sports personalities and 2 amateurs.

Between the live and silent auctions €266,150 was raised.

Monaco’s mayor Georges Marsan, as well as Jacques Raffaele, Mayor of la Turbie, were present. As were Frédéric Platini, Secretary General of the Monaco Red Cross, Michael and Gareth Wittstock, Brett Gosper, CEO of World Rugby, and Judah Schiller, creator of the Schiller Bikes, which will be used to race.