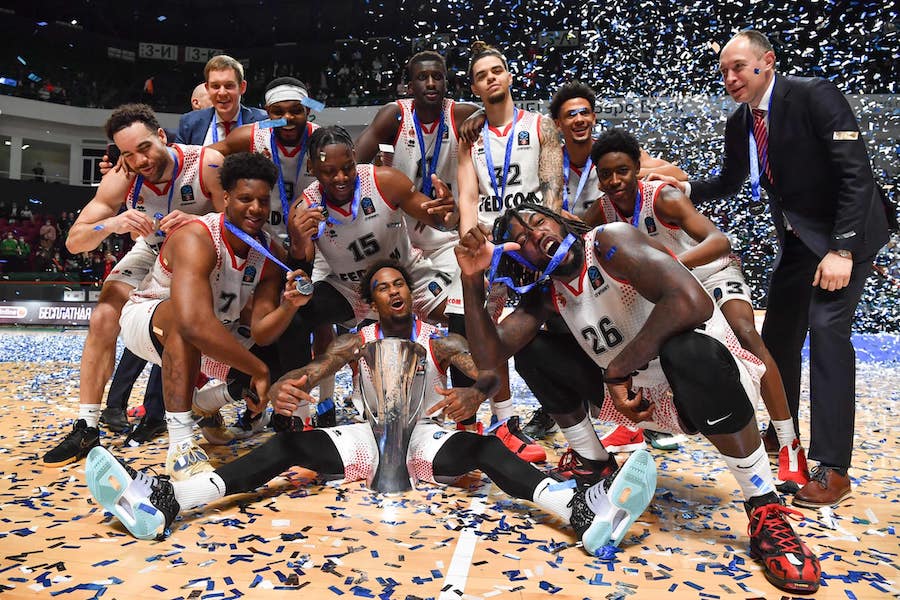 The AS Monaco Basketball team are the EuroCup 7 Champions. Another razor-thin victory over the Kazan Unics Friday night sealed the deal, giving the Roca team the title for the first time in their history and making them the first “French” team to achieve these heights.

In a roller coaster of a game by two very evenly matched opponents, it was AS Monaco Basketball who came out on top over the Kazan Unics in a 86 to 83 win Friday night on the Russian’s home turf with a live audience in attendance.

“It’s such a special moment. Before the season, no one thought we would be able to do it.w We put all our energy into it. Respect to Unics,” said an overjoyed Team Captain Dee Bost after the match. “They are a great team.”

All throughout the game, neither team had the clear advantage. The statistics at the end of each quarter show two teams playing at incredibly high levels, with only a few points between them.

By the third quarter, the cracks were starting to show as the Unics started playing very aggressively. The Roca team kept cool though, despite losing Abdoulaye Ndoye to the bench due to five fouls.

With only ten 10 on the clock, the Roca had a one-point advantage (84 to 83). It was a nail-biting moment. Kazan’s Jamar Smith took a Hail Mary shot from eight metres away and missed. Marcos Knight took the rebound and made a beautiful shot. It was nothing but net and put the Roca boys up by three with four seconds left.

Another missed shot by Smith ended the game, handing the European title to Monaco. The final score sat at 86 to 83.

“I think my team has really achieved something incredible this season,” said Coach Zvezdan Mitrovic. “You know the story, how we played with a small roster. But we played really hard, 40 minutes in all games. We gave our maximum. I am happy, still a little in shock. I think it was a great, great basketball performance.”

Roca Guard Marcos Knight, who had nearly half of the night’s rebounds for his team, followed this up, saying, “Becoming champion is never easy. It takes a lot of sacrifice. It’s an incredible feeling to be able to celebrate this with my teammates. I’m so proud of all these guys!”

The undisputed king of the night was Rob Gray who made an astonishing 25 points, 17 of them in the first half alone, including going four for seven in three-point range. JJ O’Brien was next with 16 points, followed by Dee Bost and Marcos Knight who had 14 respectively.

Monaco made 30 shots out of 64 attempts going nine for 20 in the three-point zone. There were 30 total rebounds, 11 assists, three steals and three blocks.

The team can savour their victory for a few days, before hitting the court again in Jeep Elite action when they take on the BCM Gravelines of Dunkerque 9th May at 5pm on their home turf.