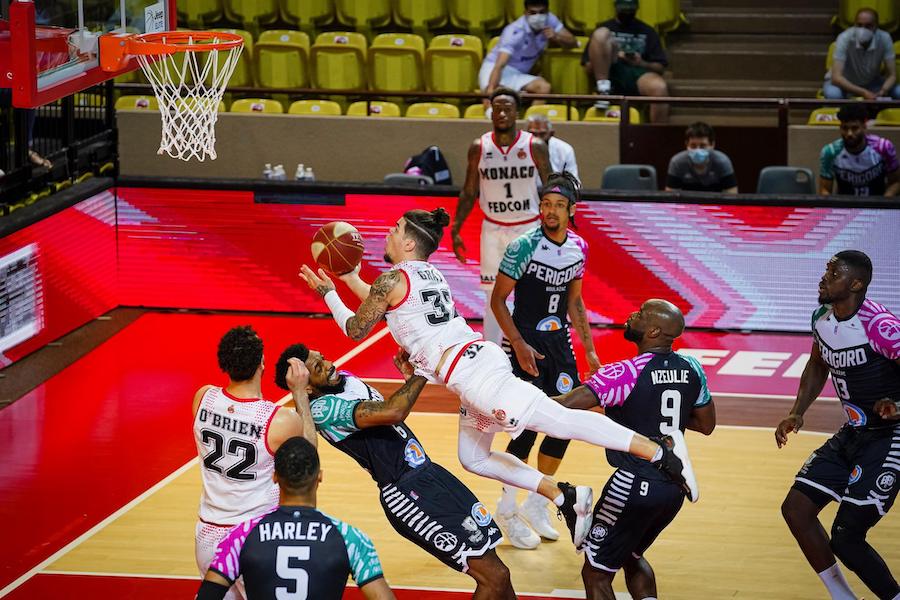 AS Monaco Basketball was on their home turf this weekend taking on Boulazac-Perigord, beating them handily 76 to 69.

The Roca team opened scoring at Gaston Medecin in front of some 900 fans with a slam dunk by rising star Ibrahima Fall Faye, setting the tone for the entire evening. He was omnipresent the whole first quarter, scoring a total of 13 points on the night.

Monaco dominated the first quarter, but Boulazac, despite recently being relegated to Line B, wasn’t about to be completely crushed. They rallied during the second quarter and sent the Roca boys into the locker room with a slim two-point lead, the score sitting at 40 to 38.

Newcomer Rasid Mahalbasic, who was on the court for ASM for the first time, opened the second half with a solid two pointer and soon after followed it up with two more at the free throw line.

Despite being in charge most of the second half, Boulazac seemed to be best under pressure and rallyed towards the end of match where, with only a minute left on the clock, they are within one basket of evening up the score.

JJ O’Brien and Mathias Lessort leapt into action, though, and pulled the boys ahead. When the final buzzer sounded, they had the win, beating their opponents 76 to 69.

“Boulazac deserves better than last place,” Coach Zvezdan Mitrovic said after the game. “For us, the matches are linked, the context is particular and the analysis difficult.”

Team Captain Dee Bost followed up this sentiment saying, “Boulazac is a good team. We had to stay focused not to let this match slip away. It’s good to find the taste of victory in front of our supporters.”

Monaco made 30 shots out of 66 attempts, going only five for 22 in three point range. They had a massive 40 rebounds, with nine of those going to newbie Mahalbasic. They collected 14 stray balls, had 21 assists and stole the ball eight times.

Mathias Lessort was high scorer with 15 points to his name, followed by Fall Faye who had 13. Rob Gray came up next with 11 points and JJ O’Brien was close behind with 10.

There won’t be much rest for the Roca team as they go on the road to Nanterre on Monday 14th June before returning home two days later to take on Strasbourg.