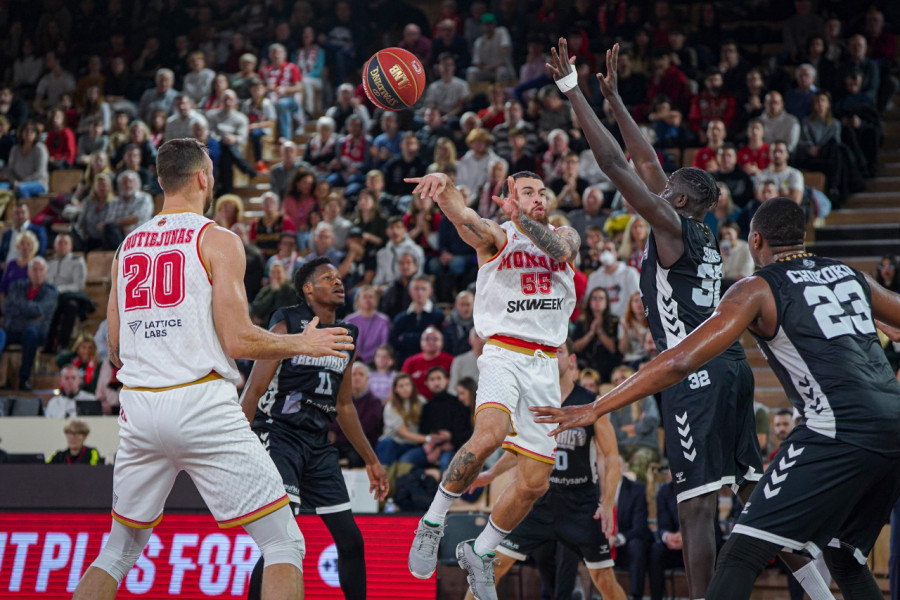 AS Monaco Basketball made a late break to secure a hard-earned victory against Pau-Lacq-Orthez (83-77) on Sunday, consolidating their position as outright leaders of the Betclic Elite.

The stars were in attendance at the Salle Gaston Médecin. The Princely family, as well as AS Monaco players Youssouf Fofana and Axel Disasi watched on as Sasa Obradovic’s side registered 13 points without reply in the opening quarter. Donatas Motiejunas (12 points) and Alpha Diallo (10 points) both found success from outside the arc during that run, whilst Mike James (22 points), who has found his influence limited in recent games, made a welcome return to form.

However, Pau, currently languishing in the lower-mid table, fought back and decreased the lead by the end of the first quarter (25-20). After Cholet’s win the day before, Monaco needed to reply in order to retain their title as outright leader of the championship, and that result came into question as Pau came back again in the second quarter, dropping the Roca Team’s advantage to just three points.

Pau continued to cling on and eventually drew level with Monaco with just 60 seconds on the clock in the fourth quarter (77-77). The Principality side hadn’t managed their possessions well, but they made their final few count, with a mix of missed free-throws from Pau and a clutch James and Elie Okobo (10 points) securing six unreplied points, and saving the day.

Monaco have a tight turnaround and will welcome Olympiacos back to the Salle Gaston Médecin on Tuesday in a repeat of last year’s classic playoff match-up. The Roca Team go into that tie as one of five teams, including Olympiacos, level on 11 wins at the top of the Euroleague.