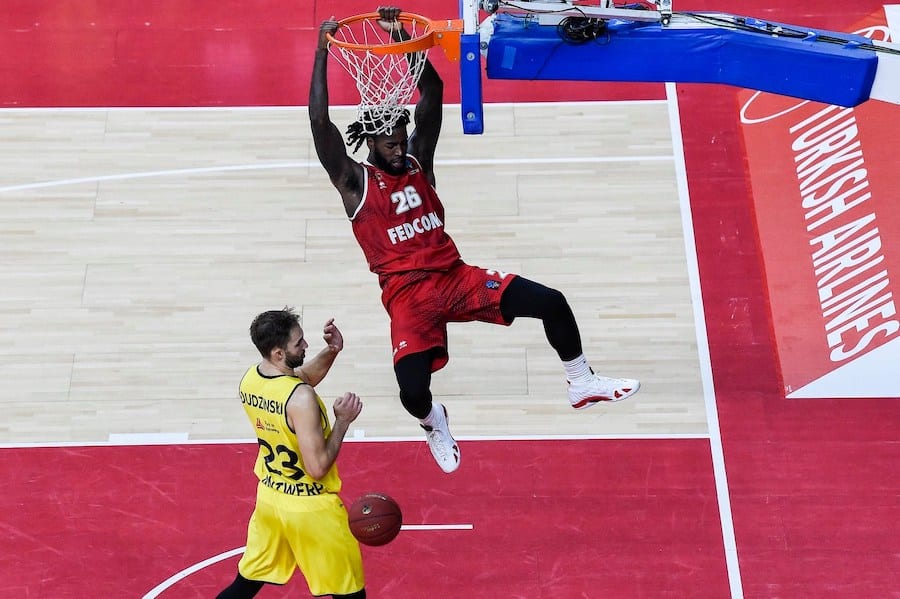 AS Monaco Basketball led from start to finish in their match against Telenet Giants played at the Lotto Arena in Antwerp, winning 75-67.
The Roca Team’s fourth Euro Cup 7 victory puts them firmly in third place in their division, keeping hope alive that they will be qualifying for the Top 16.
Marcos Knight was the undisputed star of the night, racking up 20 points, 10 rebounds and six assists. Despite his stellar performance and the team’s win, Knight saw gaps in his team’s performance saying, “I think our legs were a bit heavy. We are able to pass the ball better and defend better. We’re going to go back to training and work on that.”
Assistant Coach Mirko Ocokoljic, who has the reins whilst Head Coach Zvezdan Mitrovic is out, concurred, adding, “We won, I’m happy with the victory, but I think we need to analyse the match. I am sure we can do a lot better. The reason is perhaps the long interruption, 20 days, then the tough match on Saturday against Dijon.”
Matthias Lessort also had a fantastic night, scoring 16 points, and JJ O’Brien had a strong showing as well with 11.
Monaco made 19 shots out of 45, with nine out of 26 at the three-point line. There were 16 total assists, including Knight’s six and Team Captain Dee Bost’s five.
On the Antwerp side, Ibrahima Faye was the team’s high scorer with 14 points, and
Stephaun Branch and David Dudzinski both held their own with 12 points apiece.
The Roca will be on the court again on 21st November, when they play Limoges in a Jeep Elite game at home at Stade Louis II.