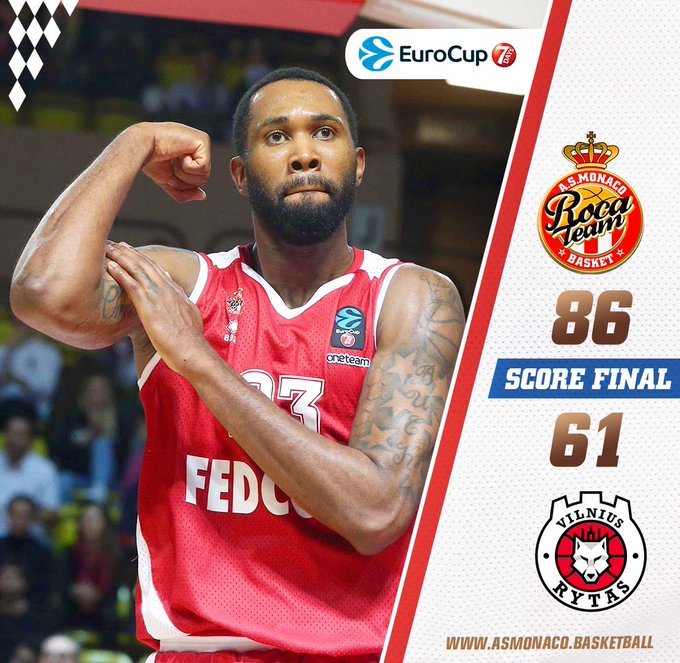 Rytas Vilnius didn’t stand a chance against the whirlwind that was AS Monaco Basketball on Wednesday night at Salle Gaston Medecin.

With a huge 86-61 victory over their EuroCup opponents Rytas Vilnius, the Red and Whites crushed it on Wednesday when they took on the Lithuanian team at home. This was clearly payback for the 22nd January beating they inflicted on Monaco on their home turf in the Top 16 Round 3.

From the outset, Monaco was on fire and by halftime, the score proved just how much. An unbelievable 53-15 span between the teams had the Red and Whites heading into the locker room with a swagger only winners can pull off.

The second half was no different, though by the 4th quarter, the astonishing lead had closed marginally thanks to three for three 3-pointers by Vilnius’s Bickauskis.

In the end, coach Sasa Obradovic’s boys gave him a 51st birthday present to remember, and the first he’s been able to enjoy, having never won on his birthday before.

“We played in a really intense way, everyone was involved in a practically perfect first quarter,” he said after the match. “We lost energy in Paris, but we had a good reaction. We expect even more challenges in the upcoming matches. It was a good it was on my birthday, it makes me smile even more.”

The President of ASM Basketball, Sergey Dyadechko, stated publicly that it’s the fans and their unconditional support that have made this team what it is. “Dear supporters, dear friends, I can only tell you how proud I am of the support you have shown for the Roca Team. Thank you for this wonderful atmosphere,” said Dyadechko in a statement issued at the end of the unforgettable night.

But Roca Team can’t rest on their laurels. They are in an incredibly tough EuroCup pool, with all four teams sitting at 2 wins and 2 losses. Monaco currently has the lead, sitting at the top with the highest basket ration and goal average.