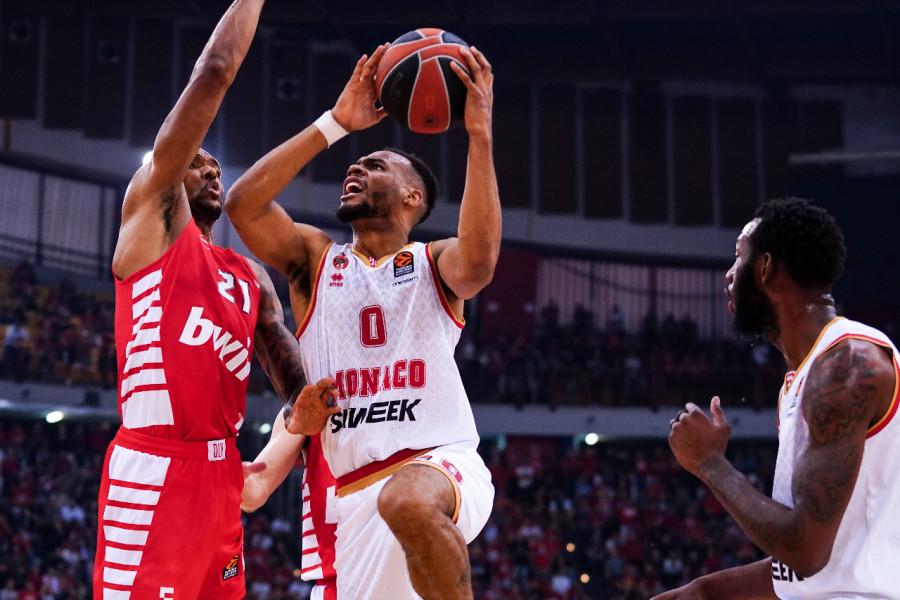 AS Monaco Basketball avenged last year’s Euroleague play-off defeat to beat Olympiacos (76-81) in a fiercely contested battle in Greece on Thursday, before maintaining their domestic invincibility over the weekend.

The Roca Team’s rise has been punctuated by nights like this. The Peace and Friendship Stadium in Athens is known to be particularly hostile. Known as ‘The Volcano,’ very few walk away with a victory. But Sasa Obradovic’s men’s performance was a testament to their progression, their accrued experience, and their collective spirit.

The arrival of Mike James (20) was a huge coup at the time, and his signing looks more and more astute with every passing match. He is the ticking heart of this team, present in every offensive phase and capable of changing the trajectory of a match on his own.

But around him, a team that plays as a collective has been built. Elie Okobo (23), who so cruelly denied Monaco of the Betclic Elite title last year is making his arrival on Le Rocher felt. He is shouldering the playmaking responsibility with James, and on the night, he was decisive, ending the match not only as the top scorer, but also registering four assists, and three rebounds.

The defence has also markedly improved. Kostas Sloukas, who like James has the ability to run the show, was kept quieter than usual. As a playmaker, he still made his presence felt (8 assists) but he didn’t score the points to be decisive in the fixture.

After two tight opening quarters, Monaco created the gap in the third (14-23). Olympiacos pushed to bring themselves back into the game in the final quarter, but unlike in recent games, the Roca Team managed the game well and didn’t allow their opponents a route back.

The win (76-81) consolidates their position in the play-off positions. Although it is still very early in the season, the signs are positive for another run at the play-offs, and maybe the final four.

Monaco backed up their victory against Olympiacos with another strong display in the Betclic Elite. Strasbourg were the latest team to succumb to the superiority of Obradovic’s well-oiled machine (75-87).

The result allows Monaco to remain in first place in their domestic division, all whilst maintaining their 100% win record. They are the only side still unbeaten in the Betclic Elite.

Monaco next welcome Red Star to the Principality in a Friday night clash against the Serbian side. The match, initially scheduled to take place on Thursday, has been moved because of AS Monaco’s Europa League tie, incredibly also against Red Star’s football side.