AS Monaco Basketball, in their debut Euroleague season, came agonisingly close on Wednesday to causing one of the greatest upsets, ultimately losing their series against Olympiacos after a nail-biting fourth quarter (94-88).

History and experience counted against the Roca Team going into the fifth and decisive leg of their five-game series against three-time Euroleague winners Olympiacos. In their debut season, which has surpassed all expectations, the Roca Team would have to defy a daunting statistic – the home side have won each of the last 14 fifth-leg tie deciders. But as Sasa Obradovic pointed out pre-match, “Stats are made to be broken”.

Amidst a fiery atmosphere, quite literally at times, in the Peace and Friendship Stadium in Greece, defences reigned supreme in the first-quarter. If Monaco were to prevail, their big names would have to turn up. Mike James (24) and Paris Lee (14)  got on the scoresheet early-on, the latter particularly prolific in the opening two-quarters.

Taking a slender advantage from the first-quarter, Monaco looked to have the Greeks on the ropes in the second. The Principality side’s strength-in-depth once again revealed itself as Yakuba Outtara arrived on the scene, finding space outside the key and finishing with a ruthless edge.

Prior to the match, Outtara said that Olympiacos “will tremble” at their own court; the Frenchman took things into his own hands in ensuring that was the case. Having grown a lead of 11 points at one point in the second-quarter, Monaco were pegged back by a Thomas Walkup (17) three-pointer in the dying seconds, but still headed back to the dressing room with a seven-point advantage (41-48).

On the cusp of an upset, Olympiacos needed to respond, and immediately set about doing so in the third-quarter. Walkup was once again at the heart of everything that was good from Olympiacos as they reversed the deficit (55-56). Yet still, Monaco refused to lie down, Dwayne Bacon (12) and Danilo Andjusic (5) responded with hoops from outside the key, before a James three-pointer on the buzzer gave the Monégasques a cherished four-point lead to cling onto.

It is in moments of adversity that the great lean on their experience to prevail. Few have more experience than Kostas Sloukas (15), and his performance was pivotal in the dying stages. Monaco were still standing, but their punches were no longer landing and the Olympiacos onslaught was irresistible.

The depiction of a nightmare for any opposition: Sloukas, outside the key and with time, the ball launched, the hoop found, the game over. The stadium erupted, the relief palpable amongst the fervent home crowd. There may still have been time on the clock, but everyone in attendance felt it; that was the sucker punch (89-83).

Monaco’s valiant, daring effort ultimately ended in defeat (94-88). They may not have been able to defy the odds one final time, but they can hold their heads high.

Lest we forget, Monaco will compete in the uppermost echelon of European basketball again next season, and Obradovic is already plotting how to take his team to the next level. “I am very proud of my guys, who played a huge match tonight. Naturally, we’ll need time to reach Olympiacos’ level, but we are only at the beginning of constructing something.”

If this is only the start of the construction process, then the end product could be a truly formidable force. 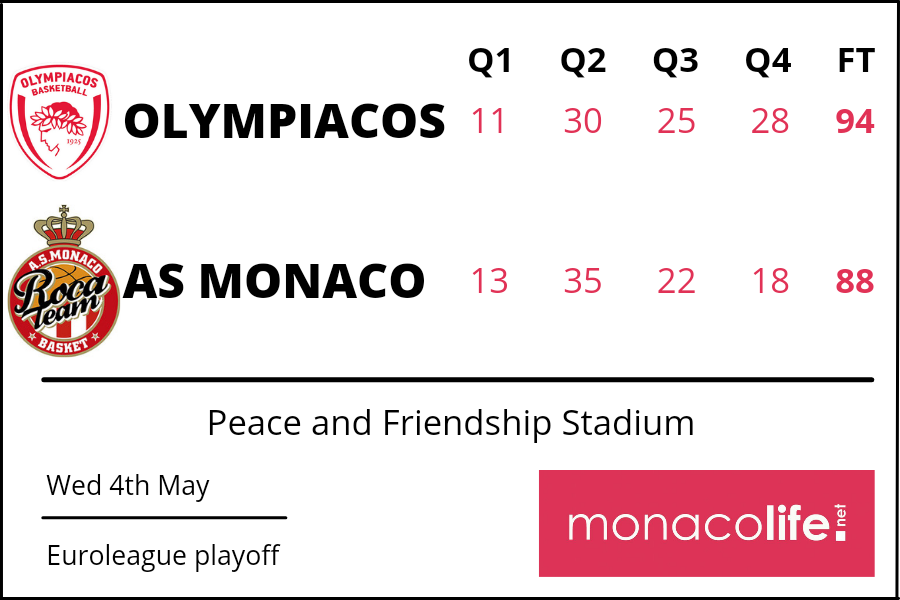