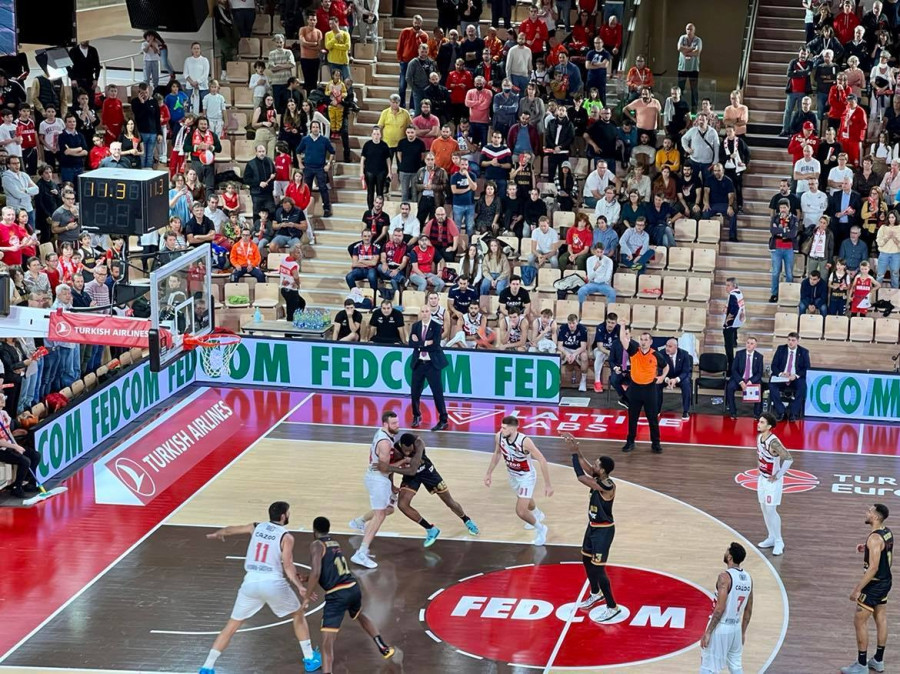 Having only lost one match in their first thirteen fixtures of the season, AS Monaco Basketball were looking to halt a two-game losing streak against Baskonia on Friday, and Sasa Obradovic’s side prevailed… just (79-74).

The Roca Team began the encounter well, quickly racing into a six-point lead, helped by star man Mike James’ efforts. The American point-guard, who was awarded with the Euroleague MVP of the month award pre-match, registered five unreplied points. But on the other side, Darius Thompson was keeping Baskonia in the game, scoring seven of the team’s first 12 points.

Monaco’s defensive efforts became more futile as the half wore on, and by the end of the first-quarter, the Spanish visitors were in the ascendency, scoring 10 unreplied points. It took a couple of moments of magic from Yakuba Ouattara to galvanise his side in the second-quarter, and set them back on track. His six-point streak and some important T3’s from Elie Okobo helped Monaco back in-front by the half-way mark (48-45).

However, on the return from the dressing rooms, Obradovic’s men once again ceded their control of the tie, allowing the Spanish side eight unreplied points through a mix of profligacy and lack of energy. Trailing by five points going into the final-quarter, the prospect of a third consecutive loss, after having lost once in their opening 13 games of the season, was a very real one.

Frustration began to seep into the crowd at the Salle Gaston Médecin, as the usually infallible James struggled to hit his usual heights, and passes went astray. Monaco may not have been at their free-flowing best, but they slowly worked their way back into the game, moving to within striking distance with five minutes left on the clock.

Elie Okobo dealt the blow with a long-range T3, restoring parity. The Frenchman then gave the side the lead seconds later after a chaotic phase of play allowed him to advance unopposed under the board. His streak didn’t end there, Okobo then converted two free throws to put Monaco in the driving seat with under two minutes on the clock.

The Roca Team had broken the back of Baskonia’s stubborn defence, but they still needed to see the game out in the final phases of play. They would do it without James, who didn’t take to the court during the closing stages, but two converted Jordan Loyd free-throws eased the tension, allowing Monaco to get over the line in relative serenity. It was far from a dominant performance from the Principality’s basketball side, but crucially, the negative spiral was broken.

Post-match, Obradovic praised the intensity of the match: “Great game, great basketball. I don’t expect any easy game. All the opponents are pretty equal, like never before. It’s a strong competition. It’s good that we showed our character in the fourth quarter, showed our best side when we needed to. It was a good team effort with a contribution from the whole team. In the past two games, we played with too much individualism, tonight was more team basketball,” he said.

“First of all, we aren’t unbeatable. We will lose games, like any other team. It is important to win any game, but not to be surprised if you lose. The team needs to be quiet, let’s go step-by-step. It’s not a disaster if you lose. It’s not like this,” Obradovic told Monaco Life.

The win is a boost for Monaco, who next welcome Limoges in the Betclic Elite on Sunday, before Fenerbahçe visit the Principality on Tuesday. “Everyone is very motivated against us. We should take this game very seriously. We need to be prepared to be surprised in this game. We want to keep a good rhythm and a good atmosphere ahead of a hard week.”