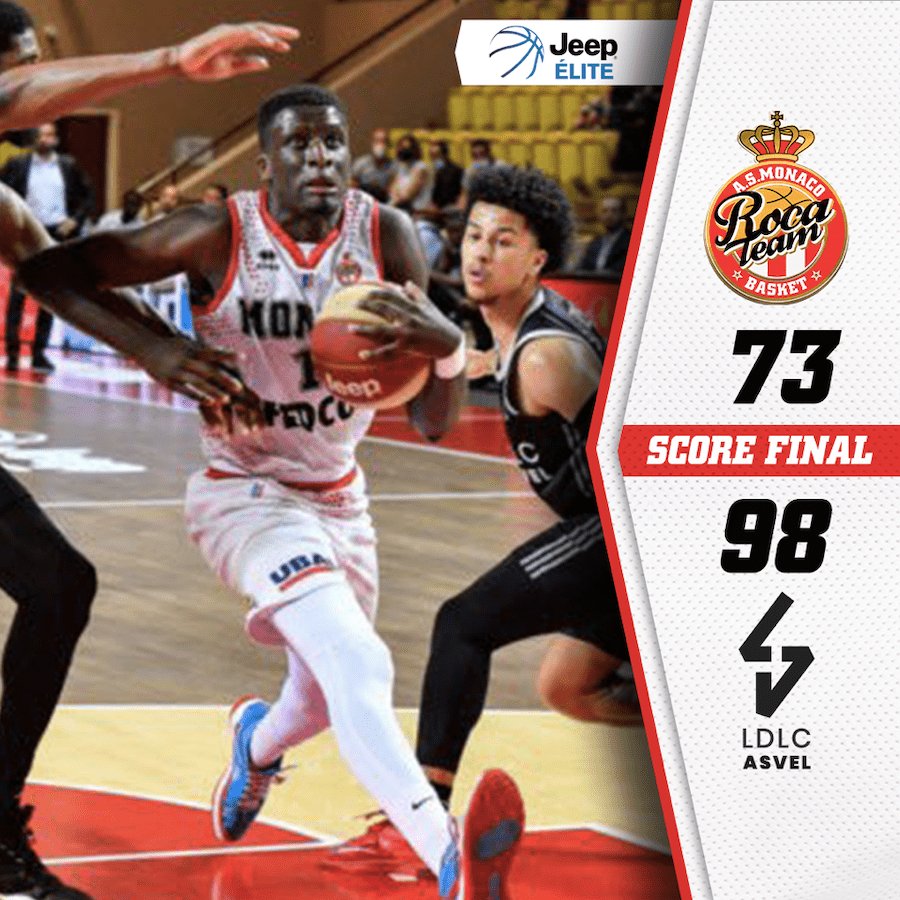 AS Monaco Basketball took a fall to Asvel Strasbourg on Friday night, putting them in fourth place overall for the Jeep Elite regular season, but still giving them the golden ticket to move ahead to the quarterfinals.

The Roca team has had an absolutely punishing schedule this past month and a half. The team played an exhausting 16 games in 40 days, with the final one of the regular season taking place at home in Salle Gaston Médecin on Friday night against Strasbourg. They jump straight into quarterfinal play on Monday when they face off against Bourg-en-Bresse in Monaco.

Coach Zvezdan Mitrovic, knowing the quarterfinals were in the bag, used this chance to pull some of his younger players off the bench to participate, and they played valiantly against a super strong Asvel team.

“These are matches without adrenaline, that’s how we experienced the end of the regular season, knowing since this month of June that it was enough to finish in the Top 4 for play in the quarter-final at home,” said Coach Z after the match. “Bourg is a very good team, it will be a good quarter-final. If we qualify, then we will play without the internationals. It’s hard to talk about the game right now. Regardless, we will always try to win.”

Clearly the coach was already focusing on the quarters, so his decision to give his stars a rest was wise indeed considering the gruelling schedule the team are coming off of. That’s not to say some familiar faces weren’t present, but many new names were on hand, giving fans a chance to see what the stars of tomorrow will look like.

In the end, the score was 73 to 98, a good effort all around. Now they can put energy toward the final matches.

“We will be very motivated for this quarter-final, and I especially, because I was unable to compete in the EuroCup,” said point guard Brenden Frazier. “We will prepare with all the necessary concentration and a new workforce. My goal is to win the championship with Monaco. The absences of Mathias and Ibou in the event of Final Four? Of course, it’s very special, I had never seen that in my career, but we can’t do anything about it, we will have to give our all.”

Monaco made 24 shots out of 64 attempts, going six for 22 in three-point range. They had 36 rebounds, with Rasid Mahalbasić taking eight on his own. The team recovered ten stray balls, had eight assists and stole the ball five times.

Rob Gray was high scorer with 20 points. Yohan Choupas came in with a strong 13 points followed by Ibrahima Fall Faye and Mahalbasić with 10 each.

Fans can join Monaco on Monday night at 7pm, when they take on Bourg-en-Bresse for the first game of the Jeep elite quarterfinals.


Meanwhile, Prince Albert thanked the entire team of AS Monaco Basketball for their first victory in the Eurocup during a reception organised on Thursday 17th June at the Prince’s Palace. After warmly congratulating the team, the Prince presented each member with the medal for Physical Education and Sports.
AS Monaco went up against the Unics Kazan on 30th April, winning 86-83. It marked the first European title for a Monegasque team.