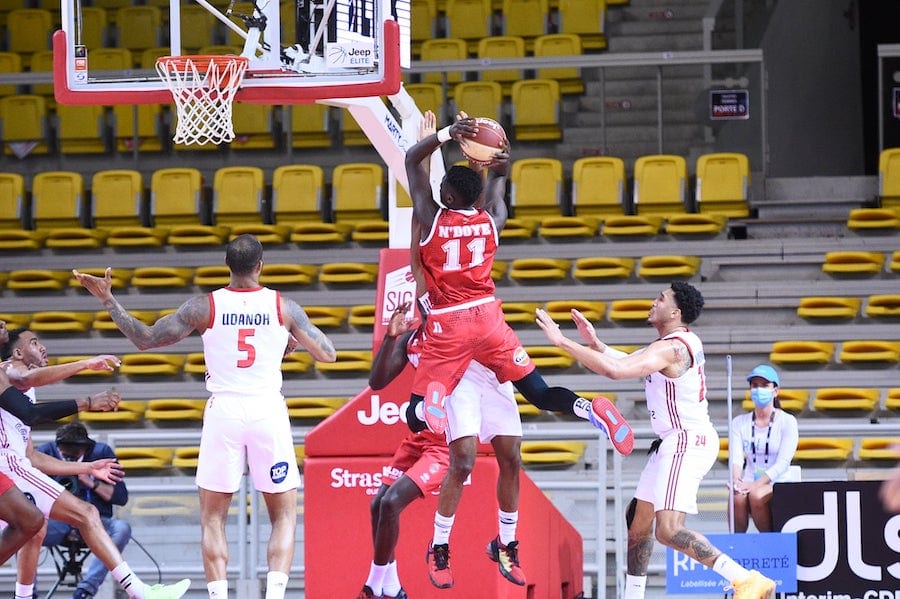 AS Monaco Basketball have gone eight for eight in Jeep Elite play at away games after their Friday night victory over SIG Strasbourg, 82 to 70.
The Roca team thundered onto the court in Rhénus, taking on a Strasbourg team that barely knew what hit them. Despite taking a little time to build, they hit their stride and by the third quarter were utterly dominating the game. Monaco had an exceptionally brilliant third quarter, where they added 27 points to the scoreboard over their opponent’s 12.
This gave the team their 16th Jeep Elite win, retaining the top spot in the league.
The night was full of good play, but one player stood out. Ibou Fall Faye added 11 points to the team’s score and had 12 rebounds, making him the undisputed MVP of the game.
“It was a good game to prepare for the final,” said teammate co-high scorer Mathias Lessort. “It was not our best face in the 1st half. Then, when we defend like we do did it in the 2nd half, we had all the assets to make the difference. We will now have a few days to rest and prepare for Tuesday’s (Euro Cup 7) final. With the adrenaline going, I don’t think that we will feel the fatigue.”
The Euro Cup must certainly have been on the minds of the players in Strasbourg, with the impending matches against the Kazan Unics at home on the 27th, and again on the road on the 30th.
The trip to the Euro Cup finals wasn’t even on the radar at the start of the season, but Coach Zvezdan Mitrovic and his team worked hard and made their way up the ladder in a tough first division league.
“Monaco was in a good position and the goal was to get promoted to the first division,” the coach told Euro Cup Basketball. “Thoughts about playing in European competitions at that time were very far away. It was more of trying to move up, avoid relegation the next season because oftentimes, promoted teams struggle to stay up. We were probably not even dreaming about this at that time.”
The Roca boys return Tuesday at home at 6:30pm to take on Russian giants Unics Kazan in Euro Cup 7 action.