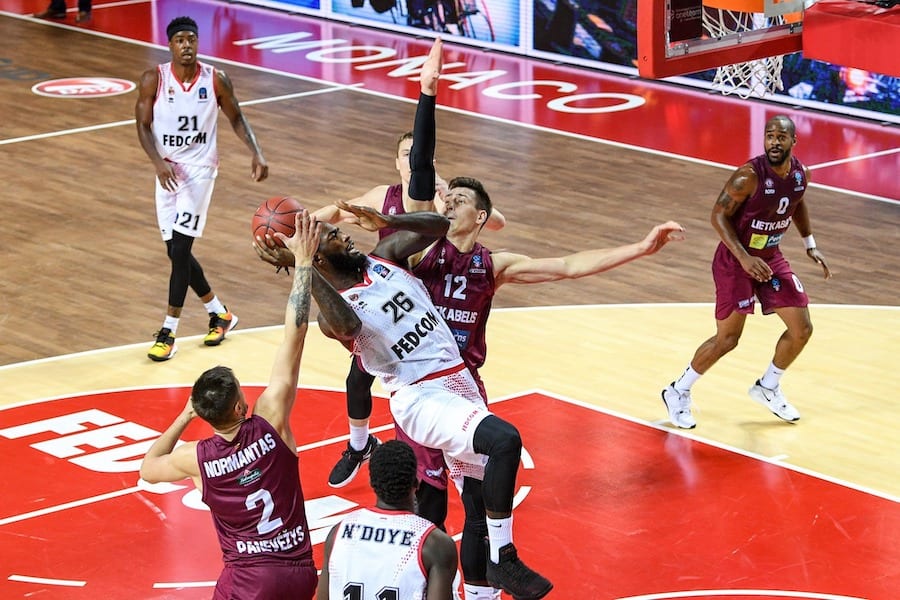 AS Monaco Basketball is back after a long hiatus and showing they are more than ready for action with two wins in a row.
AS Monaco Basketball dominated Chorale de Roanne with a final score of 86-61 in a Jeep Elite match played at home at Salle Gaston Médecin. Making an impressive 31 shots on 61, with six out of 21 being 3-pointers, the Roca Team showed that their long break didn’t do anything to dampen their desire to win.
Both newcomer Mathias Lessort and Marcos Knight astounded with 17 points apiece, whilst stalwart JJ O’Brien came up aces with 13.
“There was a lot of duelling and energy tonight. In the third quarter we really started to play aggressive in defence and we found some rhythm in the transitions,” Coach Zvezdan Mitrovic said after the match.“Roanne is a good team with a smart coach. Mathias Lessort? He’s impressive, he put a lot of energy into it tonight. He is a leader for us, he will play better, we always hope for more for him.”
Then the Roca team struck again, this time in a EuroCup 7 match, again at home, against Lithuanian team Lietkabelis Panevezys in an 82-57 win.
Monaco made 23 shots out of 44, with 8 out of 23 being 3-pointers. The undisputed king of the night was team captain Dee Bost who dominated the court, scoring 25 points on his own. Marcos Knight had a fine showing with 16 points as did Darral Willis, who finished the night with 14 points.
After the game, Dee Bost praised his team but mentioned room for improvement. “We got aggressive in the third quarter and everything went well. We are ambitious in this EuroCup. But we can play even better,” he said.
Aggressive play was the hallmark of this match. Coach Mitrovic also brought it up saying, “In the second half, we got aggressive in all aspects of the game, we found the rhythm in attack and the score flew away.”
The Roca team face Elan-Bearnais on their home turf on Monday at 9pm.